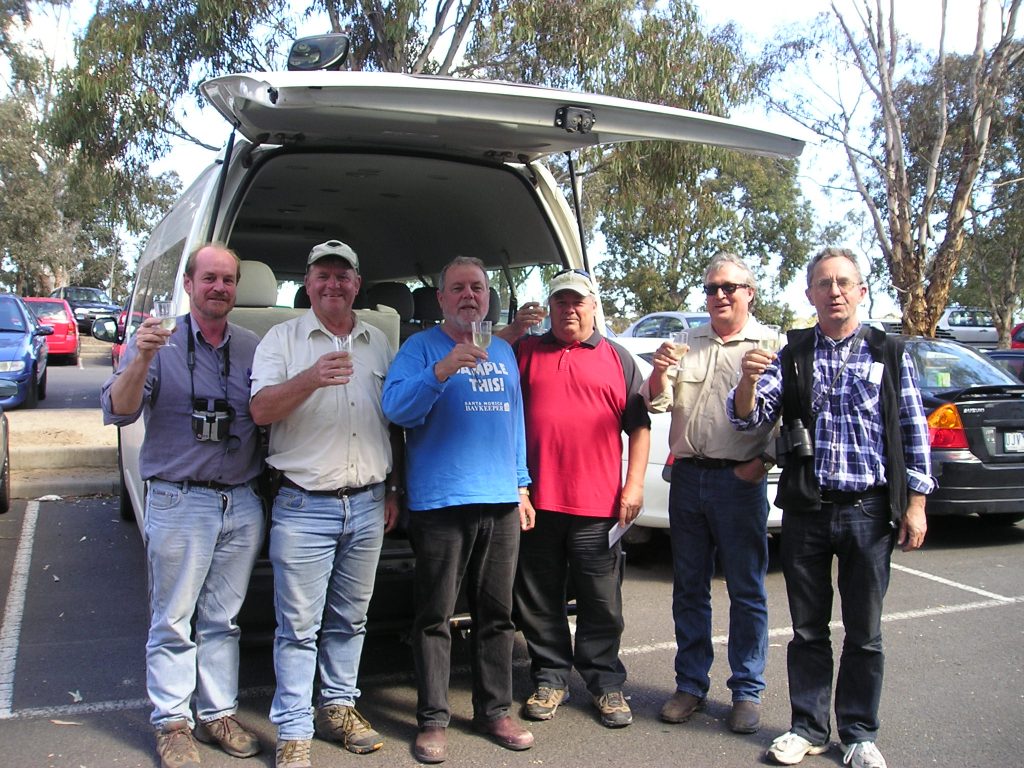 The Twitchathon for 2008 has been run and won – and the loudmouths emerge triumphant. Medallists in 2006 and 2007, the team of stalwarts equalled those last two years with the Bronze Medal for 2008. Winners were Twitching Big Eyes with 1919 species, second was Robin Rednecks with 185, closely followed by your favourite team with 176.

The twitch started auspiciously with a lively discussion on the offer, given on the window of a Coburg medical practice Circumcision – Any Age. Any Reason. What a rich field for conjecture.

The next highlight was the Mixed Grill and a beer off the wood at the Ravenswood Pub, where a lively poker tournament was in progress. We were easily the noisiest table there. Lake Tyrell out of Sea Lake provided us with the exquisite White-winged wren and a bold Orange chat, flame-lit by the morning sun, showing it in all its glory. We finally saw a Rufous field-wren there also, a tick for many of us.

We couldn’t get a bet on at Rainbow, there’s no TAB in this temperance town. Our Adelaide agent was directed by a message left on his mobile phone to place a bet for us on Bird of Fire which was running in the 8th at Flemington. With a name like that, for a twitch team it was an absolute omen. We hope that the bet, $10 each way,  did get on because it saluted, paying $18.30 for the win and $5.10 the place. That would nearly cover our excess kilometres for the hired 12 seater.

Four o’clock sounded and the twitch started. We saw Splendid wrens that were splendid, Collared sparrowhawks and Spotted harriers. We heard Regent parrots, Grey butcherbirds but no Boobook owls. All the same, we finished Saturday with 85 species – and some very good ones among them.  Dinner was a decent hamburger, purchased from the café beside Sea Lake’s amusement parlour, Thunder Alley. I cannot imagine the marketing campaign that would make the faded and jaded Thunder Alley a mecca for Mallee youth.

We wandered aimlessly in the hour after dawn around Melville Caves, saw and heard good birds in the Box-Ironbark forests of the goldfields and ticked our usual 10 species in the wetter forest around Creswick. We then joined most of the other teams racing around the bunds between the oblong cess-pits of the Werribee Treatment Plant. There were waders in their thousands, including Bar-tailed godwits, hardly fresh but all the same newly-arrived from their non-stop 2 week 7,000 mile flight from Alaska to New Zealand followed by the short hop over the ‘duhtch’. Other teams saw, in the same ponds that we scanned, a Wood sandpiper, a Pectoral sandpiper, a Great knot or even a Red knot. These are not birds that you will see on our list. Clearly loudmouths have room for improvement.

These are, however, tough birds to see. We missed some easy ones. We didn’t see a Pacific gull, nor a Greenfinch or a Black-shouldered kite. On that topic, we did see a Black-shouldered kite at about 11 am on Saturday. But the twitch hadn’t started so it couldn’t be ticked on our list. Have confidence in the loudmouths for our team motto is  “Loudmouths are nailed to the cross of integrity”.