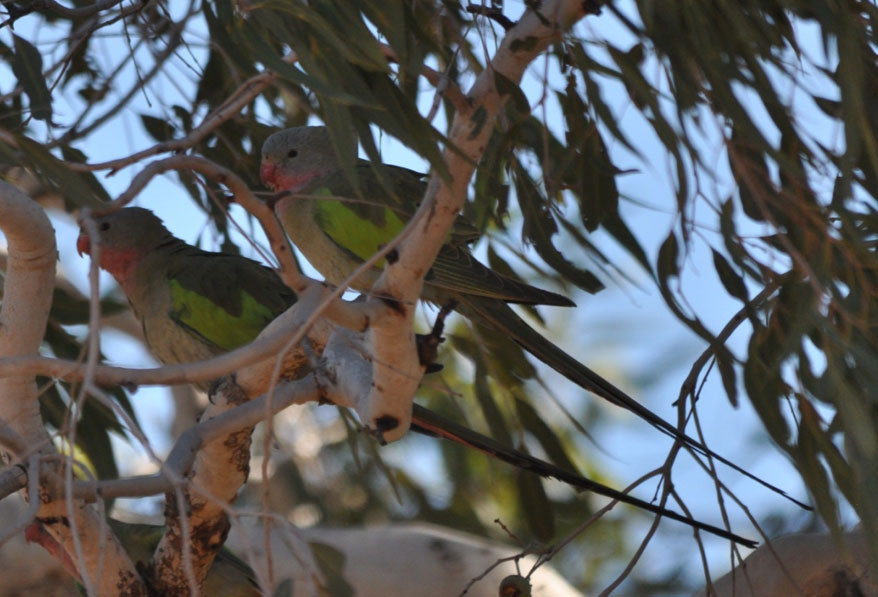 Toby was driving, I was in the front passenger seat, Philip was in the back of the Toyota troop carrier. The other car was way in front so we didn’t have to drive through their dust. We’d given up on seeing Princess parrots and we were on our way back to Alice Springs. We had a number of birds to see there and we knew how to look for them.

Earlier that day, we’d floundered across the sand dunes and through the porcupine grass. It was striking vegetation but morale was not high. We were at the spot indicated by a set of GPS coordinates where Princess parrots had been seen, albeit a year ago. More hopefully, we were told that they had been seen nearby only 6 weeks earlier. That was why we driven almost due west a little more than 700 kilometres from Alice Springs.

Now we realised that this was folly. We accepted  that when it came to Princess parrots, we didn’t have a clue. Were they feeding on the ground and was it simply a matter of spreading out and flushing them? Perhaps they were eating seeds or flower heads, but  on which of the many bushes that were everywhere after three consecutive good years? Did they perch in bloodwoods? Allocasuarinas? Should we look down or keep looking up to see if they’d fly over?

Russell had called out that he thought he saw something that could have been a parrot, he wasn’t sure. That kept us out there for another hour. Finally, resignedly, we went back to Jupiter Well, packed up and set off for the day and a half drive back to Alice Springs.

We didn’t see the Red-backed kingfisher in the tree where it had been the day before, there were no Spotted harriers to farewell us as we had been earlier welcomed, the Bustard, or turkey to the locals, had moved on.  We’d seen good birds but not THE bird of the trip. We were a bit flat. We drove for most of an hour, talking about the birds that we still might see. Ah well!

We climbed a rise in the road – and there was a sudden and  most marvellous sight. Twenty plus parrots – the high wings of a Polytelis, the ever so long tail of an alexandrae – Princess  parrots, Polytelis alexandrae.  I grabbed the radio and barked out ‘fly-over, flyover, flyover.’ ‘Come back come back, come back’. 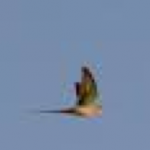 No answer, they were too far ahead. We jumped out of the troopie and climbed the dune to see if we could see where they landed, if they’d landed. And they had, in a bloodwood only 20 metres away, calling in that confiding Polytelis way to each other. As we watched, they took flight again, high wings, trailing tails, azure sky .. and numbingly ecstatic birdwatchers. They flew 50 metres on. What to do? We’d seen them but we couldn’t exult freely in front of the others if they didn’t see them too.  Mind you, we were at least two people so they would be on our trip list.

Toby said he’d go and chase them and bring them back. This would leave me and Philip on a sand dune in the middle of absolutely nowhere.  We didn’t give a rats’.  We had in front of us 23 dreamy creamy wonderful birds. He drove off, only to return 20 minutes later after working out that bouncing around at 120 kmh on rocks and corrugated roads was more than a touch dangerous. They’d just have to realise that we weren’t behind them and come back to look for us. We were planning on getting fuel at Kwiwikurra, 80 km away so we reckoned that, at the most, they’d be back in 2 hours.

The three of us settled in for crippling views of one of the most desired birds in Australia. We were not quite sated when, after 40 minutes,  the other 4 turned up. They said that they expected to find the car on its side perhaps, with our bodies strewn on the road. Instead there we were, held spellbound on a sand-dune in one of the most pleasurable cosmic mind-fucks available to Australian birders. 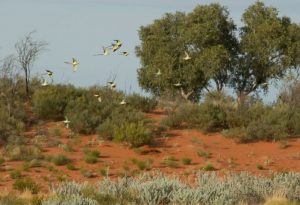 With such precise instructions as to which thicket of foliage and which fork branched off to the right just above the white splash on the left trunk, all eventually found them, and we watched for 40 more minutes.  All gave the most satisfied oohs and aahs possible, we took photographs, we recounted how they flew over, we thrilled at the red and black of their tails, we remarked on the delicacy of the green, pink and grey combination – we carried on like lovestruck teenagers. We were there for 80 minutes. 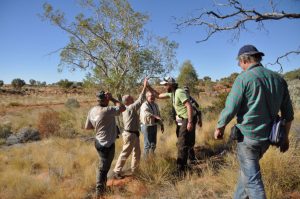 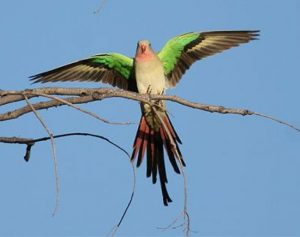