When we think ‘wildlife’, we should think India! More antelopes than Africa, elephants, rhinos, tigers and lions (in fact, 5 big cats), jackals, hyenas, langurs and macaques, over 1,300 birds – India has it all. And it’s not just the animals themselves, it’s the places where you see them. By the time the nizams, the nawabs and the nabobs joined the ranks of mere mortals on the loss of their princely powers at the settling in of Indian democracy, a conservation consciousness was abroad. The shooting reserves, into which commoners ventured at their peril, were turned over to national parks and for this oddest of reasons, India has a rich network of places in which to see this astonishing breadth of wildlife.

I have visited India many times to various parks and reserves.  Kaziranga in far-eastern Assam is a special  place – Indian rhinoceros and tiger, there’s Ranthambore – blackbuck and tiger and Mudumalai –  elephants and  langurs.

However, my favourite destination would have to be Gujarat. It is in the forests of Gir where the last prides of Asiatic lions can be found. From a precarious existence in diminishing numbers only decades ago, the population is now increasing and might well be secure.

I flew from Mumbai to Rajkot and then took buses between towns – first to the scenically-splendid walled city of Junaghad, every bit as exotic as any childhood tale of the east  describes.  From there I travelled on to Sasan Gir and booked in to the Hotel Ashok Sasangir, from where the next morning I saw the ‘lion show’.  I took a jeep out some kilometres through the dry and dusty forest to a clearing, just beyond was a pride of perhaps 12 lions, every bit as magnificent as you’d like. They were more interested in a tethered calf being held by a forest ranger than to regard me as breakfast so I was afforded a close look at this ‘king of beasts’.

I went on to coastal Porbandar, famous as the birthplace of one of India’s greatest sons, Mahatma Gandhi. Then on to  Jamnagar from where I took the 10 minute flight over the Gulf of Kachchh to arrive in Bhuj. Here I wanted to travel out to the Rann of Kachchh. The name itself was enticing – but I had birds in mind.

I had had, on a previous visit to India, one of the great zen moments of my birdwatching. It was a cloudless day and I was prowling around a small lake with binoculars in hand when I saw a distant and slow-moving smudge in the sky. It had to be birds, but what species, I wondered? I kept the glasses on them as they ever-so-slowly approached. The smudge was still darkish and I had no clue as to what I was looking at. Perhaps grey, certainly large, flapping rather than soaring – hmmm? They were by now large in my field of view but flying straight at me so all I could see was wing-width, with no clue as to their colour, overall shape, neck-length or leg-length.

As I watched, the birds were now filling the circles of my binoculars … and suddenly, with absolute synchronicityy of movement, they turned sideways and started to descend. In an instant, the indistinct grey turned to the softest pink, edged with the brightest scarlet and stark-black, all framed against the deepest of deep blue skies, to overwhelm my field of view and dispel my wonderment – flamingoes.  It was a moment I can recall whenever I wish, so imprinted is the image in my mind.

A chance of seeing flamingoes again is why I’d come to Bhuj. A group of local birdwatchers called themselves the Pelican Club and I arranged to have breakfast with them. They gave me directions to ‘Flamingo Nagar’, a breeding colony where flamingoes lay their single egg on a raised cone of mud. With thousands of flamingoes gathering in teeming nesting congregations, there really is a veritable city. In a hired Ambassador vehicle, we bounced around the trackless margins of a vast swamp where we found thousands upon thousands of flamingoes. They strutted, honked, surged here and there – they were there in uncountable numbers and they were magnificent. We also saw avocets, shovelers, many other duck species and a very large herd of camels that were brought down to drink.

It was as an authentic a wildlife experience as anyone could want.  Gujarat had delivered. 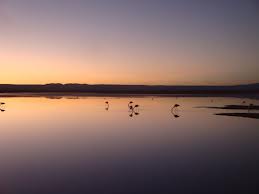 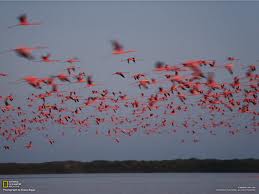 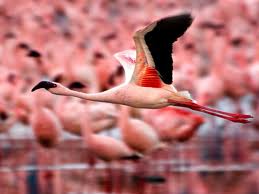 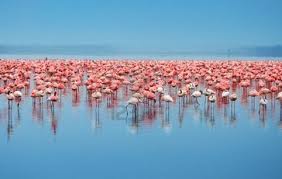