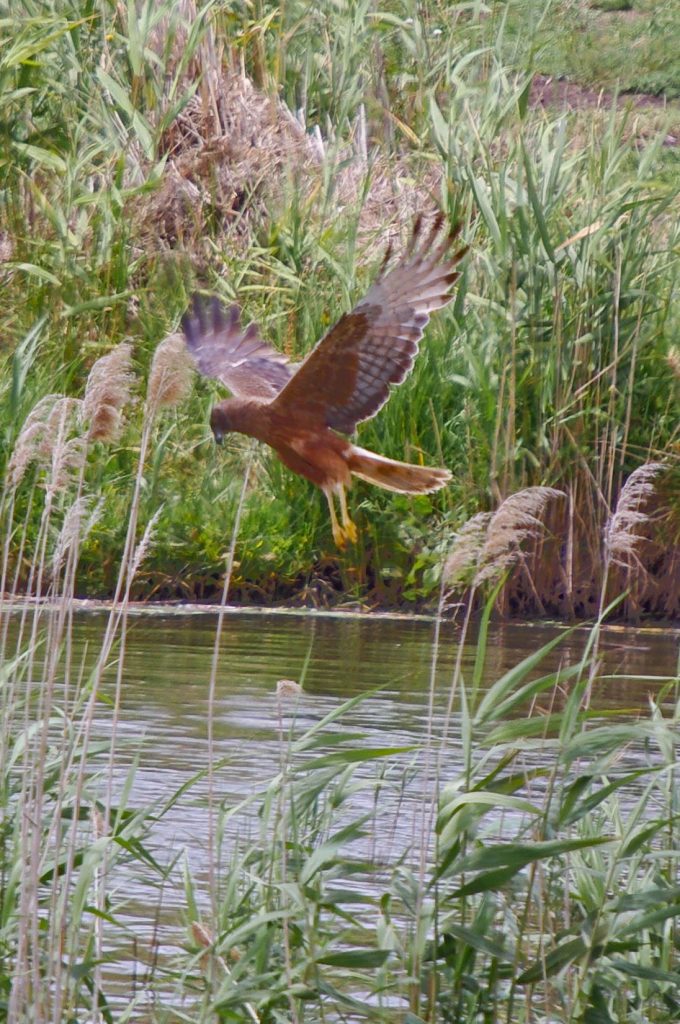 Why are they called harriers?

Our twitchathon team, the Common Loudmouths, had just seen the clock tick over 4 pm and we were glum. We’d counted 133 species in the 8 hours and some good birds among them, but we’d failed our time management, arriving at the Werribee poo farm with under an hour and a half until finishing time when we needed more than two hours.

In a bout of self-flagellation, we decided to leave the farm via a different route to see if we could find some of the obvious birds we’d missed, birds that we’d found on our Melbourne Cup Day recce 12 days earlier. Where on Cup Day there were thousands of Pink-eared ducks (aka Zebra Ducks), on Twitch Sunday, we saw none. Not one! So when we found an extensive flotilla of ducks on a pond on our way out, we stopped and scanned them to see if there were any zebbies among them.

They were mainly Chestnut teal, there was a swan or two and some coots. There was also a Swamp harrier with a Whistling kite in tow. The Swampie seemed to be purposeful in its facing into the stiff breeze with its legs dangling a couple of metres over the ducks. We pulled the car sideways with windows wound down so all four of us could get a good look through our binoculars, all the better to marvel at the aerodynamics of the harrier.

As we watched it soon became evident that there was purpose to the dangling. A quick splash of water under the swampie coincided with it lowering half a metre or so towards the splash. It was pursuing a coot which broke the surface for a nanosecond before diving desperately as the talons dropped towards it. The swampie used a minimum amount of energy with the wind providing lift while the coot was frenetic in its flurry of activity as it dashed under the surface. The Whistling kite was hardly a spectator; we thought it would become pirate upon the seeming inevitability of the harrier’s success. The coot’s dives slowly became of shorter and shorter duration and the harrier’s strategy, ‘wear the poor bugger out and then pluck it from the pond’, became apparent.

For all that, we watched transfixed quite some time, remarking on the chase, wondering about the respective energy budgets of harrier and coot and the sheer opportunism of the kite. Every second or third splash by the coot, the harrier would chance its arm(?) and drop to the water stretching under the surface with its talons to grab the diving coot. Unsuccessful, the harrier would lift up into the air again and renew its pursuit.

The coot would break the surface and splash frantically about while the raft of ducks and a couple of swans only metres away seemed quite oblivious to the drama beside them. Perhaps in their serenity they realised that it was only coot that was on the harrier’s menu.

The harrier swooped low just as the coot surfaced and the harrier dropped on it. It clearly made contact and it stayed half submerged, the coot in its talons. We could only imagine the thrashing about of the clutched coot as it was being held underwater to drown.

At that moment a swan broke free from the raft and attacked the harrier. It might have conjured up memories of all those cygnets it had lost to those talons over breeding seasons past. Who knows? The Swamp harrier immediately broke free of its underwater prey and flew off – the coot quickly surfaced. We couldn’t hear its rasping breath from where we were, the shore was about 30 metres away, but it must have been exhausted.

How many such pursuits result in harrier meals? Why was that coot singled out when so many plump ducks were all around? How well can a harrier harry? Would a coot die of infection from puncture marks? And how often does a kite get to freeload on a harriers’ hunt?

We drove away with many, many tantalising questions. Concern about blowing our schedule in the Twitchathon was already so last year!

The photgraph is not of our harrier – but a Swamp harrier nonetheless. We didn’t think to rummage about for a camera. Note those plucking legs ending with handy talons.