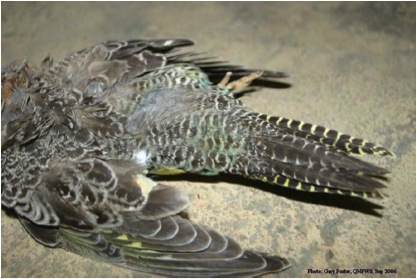 Over the weekend Birding-Aus, the Australian birding site for twitchers with attitude – posted a report of a recent sighting of the Night Parrot Pezoporus occidentalis. Another report has surfaced in the last few days. I’ve never gone looking for the Night Parrot and doubt that I’d ever have enough time, money or commitment to foolish causes to warrant spending a few months trawling the spinifex lands of arid Australia to look for a bird that no-one will believe I have seen…

A few words of caution for the uninitiated won’t go astray here. For a dedicated sub-set of Australian birders the Night Parrot is a “grail” bird. If you can say you’ve seen this grey and yellow smudge of I-look-like-a-fat-budgie bird then you get pretty good bragging rights over your mates. That’s if you have any mates, something that if you are a hard-core twitcher may well be in short supply.

One problem for the hard-core twitchers, and the rest of us, is that the Night Parrot lives somewhere out the back-of-bloody-buggery, no-one has been able to repeat, i.e. confirm, any of the recent sightings and the most reliable sightings have been of – in what makes this all just a little too Monty Pythonesque – dead parrots.

The first Birding-Aus report over the weekend says in part:

I have just received a report of a Night Parrot seen Skull Springs Road in Western Australia from XXXX at 21 52 15S 120 48 29E on 2/06/2010.  Notes from XXXX are as follows: “I noticed the single bird fluttering next to the car, so stopped as soon as I could. It has perched a foot off the ground in a dead bush. I got my binoculars quickly only the bird, only 6-7m away. It then fluttered forward a meter or 2 to the ground and hopped once or twice, in front of me but turning it’s face to observe me. The emerald back flecked with dark markings, short tail and very stocky build caused me to immediately dismiss Musk Lorikeet as an option (aside from the range). Largish head had a greyish/horn/black (slightly large) bill. A couple of centimeters larger than a Musk Lorikeet, it may have weighed twice as much due to it’s large body. This bird resembled nothing else I had seen, and even with only 15-20sec (Bino) view of the bird, it is like no other parrot in the West or the whole of region. About 30-40seconds after I first spotted it it, flew/fluttered off into the spinifex, ignoring the tree about 25-30m away. I searched the spinifex for 15-20minutes.”

The follow-up report on Birding-Aus came from an area about 145km north-east of the previous report and noted that:

“…We were driving slowly at the time with windows down and no music playing. At 5:45pm (sunset was at 5:27pm), 3 fast-flying birds crossed our track about 5-10m in front of our car. They were roughly 1.5m above the ground. I hesitantly said “Night Parrots” and David agreed. The habitat in the direct vicinity consisted of a large mesa and rolling hills, with open Eucalyptus woodland and a spinifex ground cover. This site was the most productive in terms of bird diversity and abundance throughout the survey, most likely due to water availability. For example, a pair of Grey Falcons and 6 Ground Cuckoo-shrikes were observed at this location on May 28th. The birds in question appeared to be coming from a large eucalypt-lined watercourse at the base of the mesa, almost perfecting in line with 2 small pools of water in the creekbed. The direction they were heading was towards rolling hills dominated by spinifex, with very few trees (mainly Eucalyptus and dead shrubs).

The Night Parrot is relatively small, crepuscular, prefers to shuffle about close to the ground (like it’s closest taxonomic cousin the aptly-named Ground Parrot Pezoporus wallicus), is nomadic across a vast area and with exceedingly cryptic plumage, it has never been an easy bird to tick off on your list. There are only a few specimens in museum collections – and most of those were collected from a small part of northern south Australia many years ago. The last confirmed sighting of a live Night Parrot was in 1912 and for the last 100 years it has widely been considered to be extinct and it wasn’t until the 1970′s that a series of unconfirmed reports of sightings started to emerge. In 1989 eccentric millionaire Dick Smith offered a $50,000 reward for proof of its current existence.

The following year Walter Boles, manager of the Ornithology Collection at the Australian Museum in Sydney and a leading Australian ornithology taxonomist and researcher of the evolution, systematics and biogeography of Australian birds, found a dried and very flattened carcass from the side of the road near Boulia in far-western Queensland. In 2006 a second specimen was found by Robert Cupitt at the Diamantina National Park, about 200km from Boulia.

Like many Australian birds – and not just those near to extinction – we know very little about the breeding biology, habitat requirements and life-history of the Night Parrot.

Reading these recent reports got me thinking about other sources – perhaps yet unacknowledged – of information about the Night Parrot. A few weeks ago I was doing some work with a group of Aboriginal women from a community outside of Alice Springs. At one point our discussion turned to the Night Parrot. None of the women could tell of a direct encounter with the bird but they were aware of where in their country it had been seen and of its preferred residential and foraging habitat, including names for their preferred plant species.

Another reference that I have come across in the course of my research into Aboriginal bird knowledge, particularly that of the Warlpiri people that are the traditional owners and custodians of the Tanami Desert in central Australia, is in the story that accompanies this painting by Elsie Napanangka Granites from Yuendumu, a small Aboriginal community 300 kilometres north-west of Alice Springs. Elsie paints through the Warlukurlangu Artists cooperative based at Yuendumu.

This Jukurrpa story is from country called Janyinki, close to Yuendumu. Paintings related to the Janyinki area often tell stories associated with men’s ceremonial activity in that country. The nature of that activity is so sensitive that no further details can be revealed. On another level, paintings of Janyinki Dreaming also often relate stories of women travelling through the area collecting bush foods…Janyinki country is also significant to its custodians for the various Jukurrpa that pass through the area, including that of the night parrot (Pezoporus occidentalis), a small parrot considered to be ‘critically endangered’ and close to extinction, who’s ancestral home was in the area.

An earlier local (well out here somewhere a few hundred kilometres away is considered local) reference is the likely discovery of a Night Parrot’s egg in the Green Swamp Well area of the Tanami Desert in 1986 by biologist Dave Gibson. Gibson’s account of this event is contained in his invaluable 1986 report “A Biological Survey of the Tanami Desert in the Northern Territory” published by the (then) Conservation Commission of the NT. Gibson’s report summarises the thirteen survey reports from trips he undertook with fellow biologists and local Aboriginal people between 1981 and 1983. In the survey report for the last of his trips to the Green Swamp Well of the eastern Tanami he reports that:

“An egg was found in the Spinifex adjacent to the Samphire area. Later discussions with Shane Parker, Curator of Ornithology at the South Australian Museum who suggests that there is a very good possibility that the egg is that of the Night Parrot Geopsittacus occidentalis, because of its size, location and habitat in which it was found.”

Elsewhere in the survey report Dave Gibson relates a conversation he had with local traditional owner Engineer Jack Japaljarri and Tom Jupurrula who he reports:

“…knew the Night Parrot, describing how it dug a hole beneath a Spinifex clump. The people could not explain the decline of some species although Tom claimed they could be sung up again.”

Dave Gibson also talks of the assistance provided by local Aboriginal people to his work:

“The Aboriginal women were able to supply a number of new Warlpiri names for the fauna specimens which we had with us. We recommend a greater involvement by women in further surveys; possibly the wives of men who are traditional owners of the country being surveyed. The presence of Aborigines on surveys has allowed us to gain a better appreciation of the importance of animals and land to the Aboriginal people. The Aborigine’s knowledge of the country and the animals should prove to be useful in setting up and managing any sanctuaries which can be negotiated with the Warlpiri people.”

In the Introduction to his final Report, Dave Gibson makes this observation of the contribution that Aboriginal people made to the project as a whole:

“Aboriginal informants contributed substantially to the survey, particularly by providing information on species now regarded as extinct in the Tanami Desert. Many of the species are of major cultural concern for Aboriginal people so management or research in the Tanami desert should include their active involvement.”

Prescient words from Dave Gibson there. In the years since the late 1980′s the Warlpiri people of the Tanami – and Aboriginal people across the country – have not only “proven useful” to government agencies setting up sanctuaries and national parks across central Australia but have taken on their own ventures in ways that incorporate their local traditional knowledge, provide local employment and enterprise-development opportunities and provide culturally-appropriate land and species management. For more on this work see this page on the work done by local groups all over Australia on Indigenous Protected Areas (IPAs).

And just maybe some of the hordes of twitchers, scientists and obsessives that will be out in the wilds of Australia again this year looking for the Night Parrot might take the time to sit down with some local Aboriginal people to talk about the Night Parrot – and the other wonderful birds and animals about which they know so much…

I just received this note from my mate Nigel Lendon over at Iconophilia:

He has the following note at his post here:

Who says the Night Parrot is extinct? One example was scraped off the front of a road train near Boulia, in northwest Queensland in 1990, and more recently another was found dead after apparently having decapitated itself flying into a barbed wire fence. But this fabulous painted ceramic vessel suggests the ladies of the desert at Hermannsburg know more than we give them credit for. Sure, they’ve included many exotic species in their repertoire over the years, and yes, maybe some well-meaning whitefella bought them a book of bird pictures to work from – but. But it’s highly likely they know what they’re talking about. Who else, you might ask, knows more about poking clumps of spinifex grass than these naturalists? Is this evidence, or just nostalgia? This example of their trademark ceramic art was made by Sonia Davis in 1996.