The Ginkgo, also known as the Maidenhair Tree, is a unique tree with no close living relatives. It is one of the best known examples of a living fossil.

Ginkgo is a gymnosperm; its seeds are not protected by an ovary wall. The yellow-brown structures produced by female ginkgo trees are technically not fruits, but are the seeds having a shell that consists of a soft and fleshy section and a hard section.

For centuries, the Ginkgo was thought to be extinct in the wild, but is now known to grow wild in at least two small areas in eastern China. However, as this area has known human activity for over a thousand years, the wild status of ginkgos there is uncertain.

Ginkgos are medium-large deciduous trees, normally reaching a height of 20–35 m (66-115 feet), with some specimens in China being over 50 m (164 feet). The tree has an often angular crown and long, somewhat erratic branches, and is usually deep rooted and resistant to wind and snow damage. Young trees are often tall and slender, and sparsely branched; the crown becomes broader as the tree ages. During autumn, the leaves turn a bright yellow, then fall, sometimes within a short space of time (1–15 days). A combination of resistance to disease, insect-resistant wood and the ability to form aerial roots and sprouts makes ginkgos very long-lived, with some specimens claimed to be more than 2,500 years old. A much-younger tree, obviously, is the fine specimen at the Geelong Botanic Gardens with its knobbly trunk and aerial roots.

The leaves are unique among seed plants, being fan-shaped with veins radiating out into the leaf blade. The old popular name “Maidenhair tree” is because the leaves resemble the Maidenhair fern. During summer the leaves are a deep green, turning to brilliant yellow in the autumn. They generally remain yellow for a time, then suddenly most of the  leaves drop in a short period.

Ginkgos have separate sexes, some trees being female and others being male. Male plants produce small pollen cones, females produce a seed that is 1.5-2 cm long. Its outer layer is light yellow-brown, soft, and fruit-like. It is plum-like and attractive, but the seed coat contains butanoic acid and smells like rancid butter (which contains the same chemical) when fallen on the ground.

These plants were germinated from seed collected at ANU’s International House . They are best planted to the north and west of your house where they will provide summer shade yet allow in winter light.

Cross your fingers that your tree is a male. 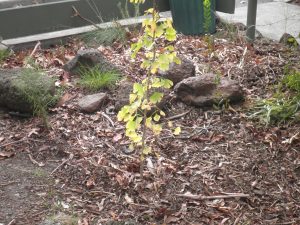 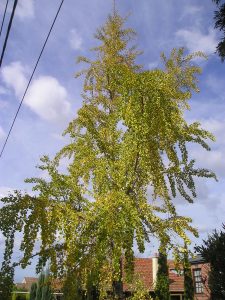 Will my little Ginkgo, germinated from Canberra seed and planted in Connell Street, Hawthorn in 2010, grow as beautifully as this one (a male) in Cotham Road, Kew?