‘Lean and nosy like a ferret’ was the byline of the Nation Review, the newspaper of choice for the counter-culture, we lingering hippies and the forerunners of the latte-sippers and chardonnay drinkers. We who are now beset with hazy memories, because it was the 60s tipping into the 70s, and we were there! This I remember. Well, I think I remember.

I’d rush home from market on a Saturday morning with my unopened copy of the Nation Review holding the promise of all manner of forbidden delights. I’d  settle in for a feast of politics, intrigue, irreverence and satire.  Mungo MacCallum accorded with my leftie views, Bob Ellis took the piss out of life itself.  I was suggestible and ready to believe anything of the military-industrial complex that John Hepworth claimed, with his entirely plausible flights of fancy.  Hindle told me what movies I should see, Patrick Cook unleashed his wit and I think that’s where I saw my first Leunigs.

In the Food Reviews, I could only wonder about the hanky-panky that Hepworth hinted at with the willing Scarlet Woman . They did seem to know each other very, very well as they flitted about town sating their prodigious appetites at the various restaurants that they were ostensibly there to review.  Hmmm, and what other appetites were they sating? At the table? Under the table? I thought them capable of anything.

And then there were the D Notices, where D was for Dalliance. All manner of licentiousness was on offer, formal introductions apparently not necessary and underwear was optional. ‘Mature gent in town for the weekend seeks liberal lady for dinner and dalliance, discretion assured.’  ‘Two free-thinking artists wanted for foursome, all suggestions considered.’  I was so outraged that it was usually the first page I turned to. Hey, I was callow and wide-eyed, freshly down from the country and it was the early 70s.

Off Brunswick Street and through the double doors, it was much like Steppenwolf’s Magic Theatre , For Madmen Only, Price of Admission Your Mind.  Inside there was a jam-packed throng; wall-to-wall bohemia, richly dressed, weirdly dressed, barely dressed. There were any number of men in raincoats wearing nothing underneath, for flashers featured in articles and cartoons in the Nation Review. I knew they weren’t wearing underwear because I could see that they weren’t wearing underwear as they wandered through the masses, flashing at the many women who had come as Scarlet Women. At least what clothes they were wearing were scarlet.  I’d never seen so many pink bits on public display. I’d been warned at Sunday School at the Orrvale Methodist Church that this sort of thing went on in the city.

The bands on the stage, indistinct through the clouds of marihuana smoke and psychedelic lights, were loud and they were throbbing. Or maybe that was me. I seem to recall waving my raised arms on the dance floor as Tamam Shud broke over me again and again with their surf anthem Morning of the earth. And did I hear Spectrum, or were they Murtceps by then? Daddy Cool? The Ladies Front Bottoms? I was simultaneously scandalised and tantalised, overwhelmed with the outrageousness of everyone around us. There was nowhere else to be.

I went my girlfriend and our group of uni students and my relationship survived that night. How many others were conceived? In the shadows and the dark corners it looked like quite a few. I was a wiser and more worldly ferret after that night.

The next year the Ferret Affair was held in the same venue, this time renamed the Much More Ballroom. That everything should escalate seemed inevitable, isn’t it true that excess breeds excess. 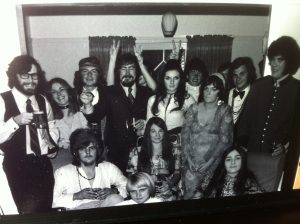 Preloading for the Ferret Affair – all anticipation, bravado and fashion crimes aplenty! I’m 3rd left at the back, teaming a headband with a black caftan trimmed with glittering braid. If the affair was to be excessive, I would be too!