Bobby Kennedy Jnr was a strong advocate for the environment, with his presidency of the US-based Waterkeeper Alliance and the global network of community-based waterway advocates. Waterkeepers are fearless champions and protectors of their creeks, rivers and bays, taking on all who would deny our birthright of clean water and a clean environment.

I visited some US waterkeepers and even hosted some in Australia when I was with Waterkeepers Australia. Check out www.wishtoyo.org and you’ll see how Mati Waiya, Ventura Coastkeeper and proud Chumash leader, is protecting his part of the Californian coast within the cultural context of his traditions and people. 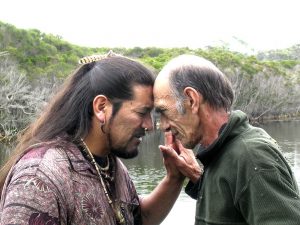 Mati came to Australia to talk with indigenous people and learn about their interactions with our resource companies so he could advise his people on how they could deal with them when they were active on his part of the coast. Here he is meeting with Gunnai-Kurnai elder Uncle A Mullet on the Snowy Estuary.

Back to RFK Jnr. He has since left the WEaterkeeper Allance and I’m not sure where his thinking is going. He has become a prominent campaigner within the US Anti-Vax movement, perhaps and the next image and the quote is a real problem. 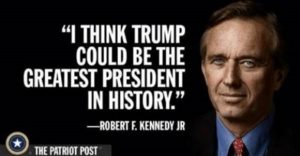 Where is the old RFK Jnr? Bring him back!