A rose by any other name ..

These are changes to common names as bird relationships are reviewed and realigned. A number of our dotterels have been recognized as being variants on species in other countries so our Red capped dotterel has become the Red-capped plover. A Hooded dotterel is now a Hooded plover while our Spur-winged plover is now recognised as a lapwing.

Birder Phil Gregory commented in a post on Birding Aus, the subscription email list for many Australian birdwatchers, as follows:

The ever-vexatious English names are noteworthy too, I was very pleased to see the reappearance of old favourites Satanic Nightjar and Invisible Rail, which got written out of history a while back for unknown reasons / some checklist compiler didn’t approve of them, and Wallace’s Standardwing reappears after long absence, as indeed it will appear in my own Birds of Paradise and Bowerbirds title.

There are a couple of interesting choices too, notably the use of Monarch for Myiagra Flycatchers, so we would have Leaden Monarch and Satin Monarch. I know they are Monarch-Flycatchers but remain unconvinced by the change. The one that made me smile though was to discover I’d seen Willy Fantail, a bridge too far if ever there was one surely?

I don’t reckon the very many fans of our endearing Willie wagtail will accept Willie fantail.

I’m a Collingwood  Magpies supporter. I could have chosen to support the Hawks, Eagles or Swans but I like the pugnacity of Magpies. I was at the footy standing in the outer at Collingwood’s original  home ground of Victoria Park many years ago when a lone Masked lapwing flew out across the oval. A supporter towards the front called to his mates ‘Hey, check the Spur-winged plover’. Someone in the crowd said ‘Nah mate, they’re called Masked lapwings now’.  From elsewhere in the crowd ‘Are you sure?’ From two or three supporters among the obviously learned and caring crowd, ‘Yeah, they’re lapwings now, they’re related to lapwings overseas’. Ah, you have to admire the sensitivity and erudition of the Collingwood supporter.

Changes occur in the science too. Taxonomists revise their thinking of species and genera in response to DNA studies. Hence we see splitting and lumping. Splitting occurs when two sub-species show sufficiently different DNA that they should be split into two separate species whereas lumping is the converse.

Here are the lumpers at work.  J A Leach in his ‘An Australian Bird Book’ in 1908 claimed eight species of sitella,  we now have the one, the Varied sitella. Clever name, taxonomists. Similarly, a number of fairy wren species have become the Variegated fairy wren. The splitters are getting stuck into the grasswrens of the genus Amytornis. Whereas my Bird Atlas of 2003 shows 8 species, Menkhorst et al, the newest  guide released in early 2017, shows 11. Twitchers hate lumping as it reduces the number of species that they can put on their life-list, while splitting means that they have an increase. I have just redone my list and I’ve climbed to 640 courtesy of the splitters’ work, giving me armchair ticks in albatross, honeyeaters and the Iron Range’s Black-eared catbird.

But back to common names. Is there any group of birds with such evocative names as the Cisticolas? Our Zitting cisticola is one of the more ‘tame’ names. Just check this lot from the 51 species on the world list. 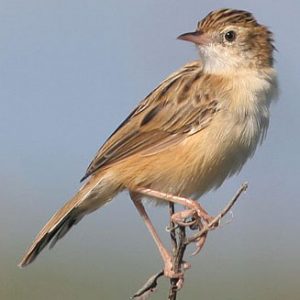