“Next to discovery of a new species, there is no event more exciting as rediscovery of a lost one” Wilson, 1937 on Night Parrot…. by Simon Mustoe

IF a bird’s value was measured by its rarity, the emerald-plumaged Night Parrot would surely be more sought after than the rarest gemstone. It’s an avian treasure and it gives birdwatchers sleepless nights.

Amusingly, an Australian birder we spoke to may have foretold the recent record after a dream of watching Night Parrot in northwestern Australia. The actual report in mid-March this year would be the first in Victoria since the start of the 20th Century and the latest in only a handful of records throughout Australia since European settlement.

Somewhere in the Australian outback is a population of Night Parrots waiting to be discovered.

One wonders if this will be the decade for rediscovery of Night Parrot. We’re in the wettest period of Australia’s climate history for nearly 50 years. The last time there was any rainfall this significant was the last major La Niña event in ’73. As noted by Melbourne ornithologist Brett Lane in our article Wetland Birds Arrive in Droves, “[there were] huge floods in ’74 – ’76, when Lake Eyre filled” – an area with historic relevance for Night Parrot sightings.

I shot some specimens at Cooper’s Creek in 1875 when out as collecting naturalist for the late Mr J.W. Lewis in his exploration of the country about Lake Eyre. They were in that district observed to conceal themselves during the day in the thick patches of shrubby samphire, on the salt flats bordering the creeks (Notes on the Night Parrot, read by Mr F. W. Andrews, Royal Soc. of South Australia, 1883).

Lane adds “For the next ten years, inland wetland conditions were excellent”. Maybe this would help explain why in the 1980s there were several records of Night Parrot in the Queensland Mt Isa – Cloncurry region.

Of course, 40 years ago there wasn’t the travel and communications infrastructure we take for granted today. Until only a couple of years ago, Princess Parrots were an almost unobtainable sighting for most Australian birdwatchers – now they are turning up on Australian Wilderness Conservancy’s Newhaven and across the WA border at Neale Junction. What’s to say Night Parrots aren’t about to make similarly unscheduled appearances?

This could be the first time in European settlement history that we’ve had both the information, the population and the access to search areas where they might occur.

Night Parrots are one of the least known birds in the world. We have photographs, even film of Tasmanian Tiger but not a jot on Night Parrot. Last year we wrote about proposals to mine a forest in Western Australia where the last credible record of Night Parrot occurred, in 2005. The environmental assessment read strangely – the consultant’s report suggested habitat may not be significant for the bird, despite it having been seen there. We really do know nothing about it and can’t make many presumptions about its behaviour and occurrence. 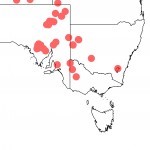 Despite the fact the recent Victorian sighting is unconfirmed, it is odd that it was withheld for over two months. There are of course many excuses to keep records secret – private land, sensitive habitat, rarity of the bird etc. No-one doubts the importance of work done to attempt relocating the bird using remote sensing but that was a while back. There are well known, public reserves in northwestern Victoria with good access and plenty of potential habitat where other sightings could occur. In any case, the record is about to be broadcast in a major newspaper.

The point is this. If we know nothing about a species except that it’s very rare and its future hinges on finding out anything about it, the primary objective surely has to be to locate one. Experience suggests that Night Parrots are extremely hard to find. It’s a ground-dwelling nocturnal parrot after all. Following the 2005 records in Western Australia, several years of consultancy were mounted and no further records obtained (though there were apparently anecdotes from mine workers who worked on site continuously).

One has to question why reliable reports of one of the world’s rarest birds aren’t routinely subject to a larger public and coordinated search effort. What is there to lose? Is it better to keep everyone in the dark and mount a small strategic effort or let people know and increase the number of observation hours a hundred fold? When a carcass of an immature bird was famously found in the Diamantina (Qld) a few years ago, the state authorities recommended against publicising the find. Consequently there was less potential to locate and study the birds that had bred in the area.

Perhaps we’ll never know whether these ‘ones that got away’ were missed opportunities. If so, how long before we get to study the first Night Parrot since the live bird was shipped to London Zoo in 1868?

An indicator of climatic change 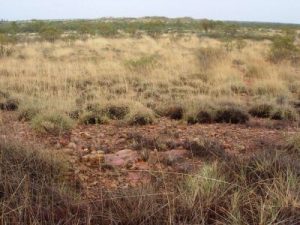 This is exactly the habitat Night Parrot was seen in during the 1980s. Note the heavy spinifex layer and the low rocky escarpments in the distance. A mosaic of habitat is what’s needed for food and shelter. Problem is, spinifex plains are everywhere and no-one really knows what constitutes high quality and poor quality habitat.

Although the historic literature often refers to Night Parrot as ‘common’ throughout its range, one gets the distinct impression it was only common in certain areas at certain times: that the impression of widespread abundance was because it was only reported from places where it was recorded with regularity. In fact, it may have always been thinly or patchily distributed in areas with a mosaic of habitat, providing food, nest sites and water. It’s also pretty clear that cattle, sheep and burning had a huge influence.

“The fluctuations of the Night Parrot with the season have been noticed by Mr. F.W. Andrews, and that means either that the bird is nomadic, congregating where living is good or that it has a reserve breeding capacity which enabled it to multiply when conditions were favourable. I have been impressed by the fact that the period of its comparative abundance extends only from 1875 to 1885, though much of its habitat was known before that. It is possible that some cause, such as climate, enabled the species to attain to normal numbers during that time, and that subsequently unfavourable conditions greatly reduced the numbers … “

While it would be absolutely wonderful to have more sightings of the Night Parrot, I can understand the hesitation of State authorities in releasing the information to the public. Due to the rarity of the bird, unfortunately there are many people who are out to make a quick buck who would read the information in a newspaper and then go carelessly trampling through the bird’s habitat to try and catch a specimen. I assume the potential damage people like this could cause would weigh heavily on the decision not to publicise any recent findings or sightings. On the other hand, a balance is needed in publicising info that could potentially benefit the Night Parrot’s longevity, perhaps the information could be shared with certain people who do have the knowledge, skills and ability to research this bird’s habitat with the least disturbance and risk caused. I would trust that this is exactly what has happened, and if so, then perhaps we can look forward to reading about their research findings in future in a scientific journal. Either way, I guess any findings would need to be treated with the utmost care and confidentiality to prevent a scenario such as the one in my first paragraph from happening.
Bird-O says:

Cindy, great points and all valid. There are always going to be difficult decisions to make about publicising such information. I very much doubt that the observer would have suppressed it without a very good reason. It wouldn’t be to stop birders going and searching, moreover to be able to have time to confirm the record or indeed, find other birds (or maybe the observer doubted the validity of their own sighting). There is nevertheless ample habitat in that area and wider areas of NW Vic (Little and Big Desert etc) that are visited by birders all the time. A heads up can be useful and done without having to jeopardise bird welfare. In any case, if we were concerned about collectors, then there should certainly be no publicity at all – newspaper article of anything. I think this is more of an institutional issue. Suppressing records is the norm in Australia because we’re very conservative. Perhaps if we spent time considering the benefits of sharing records, we might find there is more to be gained.

An article in The Age describes this sighting; it occurred at dusk, presumably in poor light, and the observer admits doubts about the identification, as a bird flew over his head. A very short sighting. Night Parrots are considered largely terrestrial and low-fliers. He describes the sighting as “less than perfect”.

It sounds intriguing, but such poor, brief views, and a far from confirmed sighting. I wonder if the subsequent efforts to locate the species would have been undertaken if the observer wasn’t a Birdlife office-bearer? It seems like a lot of effort for would be considered a “possible” (at best) sighting if an amateur birder had experienced it. I hope it was one, but I don’t think describing it as “likely to be hunted down” by birders is reasonable, or does anything to promote birdwatching to the broader community.

I have just found this site very interesting. In the 70s I used to collect birds for Zoos Etc. many very rare. on one trip I saw a night parrot. its been a private vision in my mind ever since, now retired very heavily into photography + video making, been planning a trip back to the area with all the gear remote cameras plus all the gear needed for sound recordings etc etc. The problems I have is in making the doc (looking for night parrot ) if I am lucky enough to find any the prob mentioned above could happen, “but then does that mean do nothing”. I usually travel on my own this trip I am planning 6 to 8 weeks in this area western desert WA If all goes well I will head out end of July . I will just put a link to clip of a Doc I made on Mallee Fowl have not put on market yet just preview