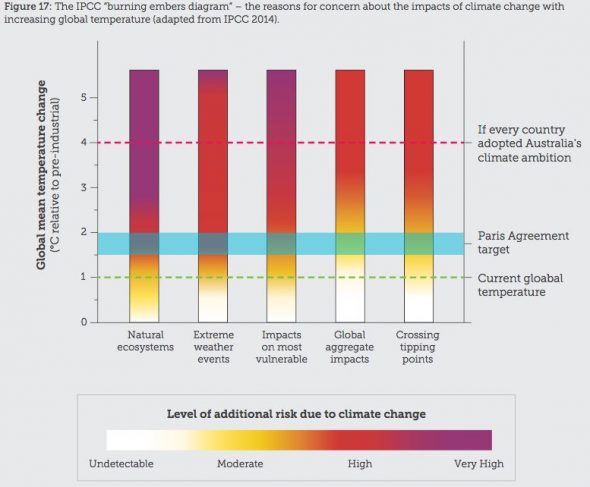 Australia – global climate laggard. Doesn’t sound too good, does it? Our outrageous treatment of refugees, our indefensible deferral of an indigenous ‘treaty’, our silly response to marriage equality, our farcical NBN etc  are all national disgraces. Our paltry climate response is our global disgrace.
Top Post
On climate change, there aren’t ‘two sides.’ So why do some feel otherwise?
Katharine Hayhoe
The top predictor of what people think about climate change has little to do with scientific literacy – it’s about politics. Here’s how to change that.
http://www.macleans.ca/opinion/on-climate-change-there-arent-two-sides-so-why-do-some-feel-otherwise/ Today’s Celebration
Anniversary of 1st Call for Independence in Los Santos  Panama
Independence (Cry of)            Palau
Maputo City Day (Maputo only)          Mozambique
Militsiya (Police) Day            Russia
Potosi Local Festival            Bolivia
Marine Corps Birthday            United States of America
World Science Day for Peace and Development     http://www.un.org/en/events/scienceday/
International Week of Science and Peace       http://www.un.org/en/events/scienceday/week.shtml
More about Nov 10               https://en.wikipedia.org/wiki/November_10 Climate Change
There will soon be floods of climate refugees: Will they get asylum?
New Zealand is considering creating a new visa for people fleeing environmental disasters brought on by climate change.
https://www.fastcompany.com/40491897/there-will-soon-be-floods-of-climate-refugees-will-they-get-asylum

Miami voters just sent their climate-change-denying governor a message
With Hurricane Irma still fresh in their minds, Miami residents on Tuesday voted yes on a big funding measure to protect their city from climate change.
https://news.vice.com/story/miami-voters-just-sent-their-climate-change-denying-governor-a-message

Atmospheric rivers could increase flood risk by 80 per cent
The global effect and impact of atmospheric rivers on rainfall, flooding and droughts has been estimated for the first time – revealing that in some regions the risks can be enhanced by up to 80 percent.
http://www.enn.com/ecosystems/article/53105

27 Ways Heatwaves Can Kill
A new systematic synthesis by researchers at the University of Hawaii at Manoa shows that there are at least 27 different physiological pathways in which a heatwave can kill a human being, and everyone is at risk.
http://www.enn.com/pollution/article/53096

It’s time to rethink the relationship between borders and climate change
Reece Jones
Climate-induced migration is now a reality. Opening borders and removing sovereignty from environmental decisions needs to be considered.
https://undark.org/article/borders-climate-change-displacement/

On climate change, there aren’t ‘two sides.’ So why do some feel otherwise?
Katharine Hayhoe
The top predictor of what people think about climate change has little to do with scientific literacy – it’s about politics. Here’s how to change that.
http://www.macleans.ca/opinion/on-climate-change-there-arent-two-sides-so-why-do-some-feel-otherwise/

Fighting the creeping catastrophe of climate change
Lourdes Tibig and Denise Margaret Matias
Governments must fulfill their commitment to act on climate change on all fronts, even as they continue to ramp up disaster risk reduction and mitigation efforts.
http://www.ipsnews.net/2017/11/fighting-creeping-catastrophe-climate-change/

National
Graphs of the Day: Australia the global climate laggard
If the Turnbull government was setting the standard for global climate action… we’d be going to hell in a handcart, says new report.
http://reneweconomy.com.au/graphs-of-the-day-australia-the-global-climate-laggard-62590/

Renewable energy for industry next big thing for Australia, says IEA
International Energy Agency says solar, hydro and and wind have enormous potential for use in industrial processes – particularly in places like Australia, where the cost will be $USUS30/MWh.
http://reneweconomy.com.au/renewable-energy-industry-next-big-thing-australia-says-iea-36173/

Abbott’s ‘cap and trade’ carbon scheme kicks in
Carbon traders say at least six big emitters have blown their 2016-17 baselines and will need to buy credits to meet their mandates.
http://www.afr.com/news/carbon-trading-cranks-up-this-summer-as-big-emitters-blow-caps-20171108-gzhn5f

Critical decade 2017: accelerating climate action
Climate Council
Australia’s critical window of opportunity to tackle climate change is closing, with a this report revealing Australia is falling behind the rest of the world and failing to tackle climate change, as pollution levels continue to rise.
http://apo.org.au/node/118526

Why is Australia so slow at adopting electric cars?
Graciela Metternicht and Danielle Drozdzewski
In the race to adopt electric vehicles, Australia is sputtering along in the slow lane. Rather than growing, Australian sales of electric cars are actually in decline. Here’s why.
http://www.abc.net.au/news/2017-11-09/why-is-australia-so-slow-at-adopting-electric-cars/9135798

Energy incumbents are going on a ‘gorging spree’
Marc Hudson
Big fossil-fuel-based utilities are overcharging their customers, going on a “’gorging spree” while they still can.
http://reneweconomy.com.au/energy-incumbents-are-going-on-a-gorging-spree-66777/

Are renewables and batteries part of the power generation & storage solution?
Geoff Carmody
How efficient are different types of batteries/energy sources? A key metric is ‘energy density’.
http://www.onlineopinion.com.au/view.asp?article=19400

Victoria
Financial close for Swan Hill Solar Farm project
The construction of one of Victoria’s first large-scale solar PV farms is a step closer to getting underway. …
https://www.lawyersweekly.com.au/biglaw/22229-financial-close-for-swan-hill-solar-farm-project

Timber looks to plantations
Victoria should prepare to transition from native logging to plantation timber, a parliamentary inquiry into VicForests has recommended.
http://www.weeklytimesnow.com.au/news/national/vicforests-inquiry-timber-industry-transition-urged/news-story/d27ace648af02cac8ba90814a9bdd870

Greens launch Great Forest National Park campaign
Victorian politicians could be forced to vote on a proposal that would end native logging, when the Greens introduce a bill to establish the Great Forest National Park next year.
http://www.weeklytimesnow.com.au/news/national/greens-launch-great-forest-national-park-campaign/news-story/722f9e75768c4292efe968c4137debcd

WestConnex: why its bureacratic brazenness is just a cliche
Sean Nicholls
http://www.smh.com.au/nsw/bureacratic-brazenness-shows-westconnex-consultation-just-a-cliche-20171109-gzhrrh.html

Queensland Election 2017: Premier Annastacia Palaszczuk contradicts herself on Adani loan again
Premier Annastacia Palaszczuk has again contradicted herself over her veto of Adani’s $1 billion loan, saying the Federal Government can still pay for it, if it wants to.
http://www.couriermail.com.au/news/queensland/state-election-2017/queensland-election-2017-premier-annastacia-palaszczuk-contradicts-herself-on-adani-loan-again/news-story/1fa558a7123428b49f9809e72c685f59

‘Christmas could come twice’ for scientists studying coral spawning
The coral colonies of the Great Barrier Reef simultaneously mate and give birth in what is expected to be the first of two spawning events of the year.
http://www.abc.net.au/news/2017-11-10/researchers-race-to-capture-coral-spawn-to-boost-reef-resilience/9135164

Why the Adani project should be rejected
John Hewson
Adani was always going to be a significant issue in the forthcoming Queensland state election. It is a divisive issue and one where the major players have sought to play excessive, short-term, politics in recent years.
https://www.brisbanetimes.com.au/opinion/why-the-adani-project-should-be-rejected-20171109-gzhsfh.html

Let’s learn from mistake
Mercury editorial
Sometimes we all make mistakes. And it appears the Department of State Growth might be guilty of one with the new carpark at the Bruny Island Neck.
http://www.themercury.com.au/news/opinion/editorial-lets-learn-from-mistake/news-story/5282c6704e96f6d588c6b027c7143ee7

Updated bin system encourages organic waste
Seven thousand homes in Melville are trialling an updated three-bin system which takes organic waste from both the garden and the kitchen.
https://thewest.com.au/news/wa/new-bin-system-encourages-more-organic-waste-ng-b88655867z

Sustainability
Mapping how to feed 9 billion humans, while avoiding environmental calamity
On Tuesday The Leonardo Dicaprio Foundation unveiled an ambitious plan to protect and connect 50 percent of the world’s land area as part of a broader effort to curb global warming, stave off the global extinction crisis, and ensure food availability for the planet’s growing human population.
https://news.mongabay.com/2017/11/mapping-how-to-feed-9-billion-humans-while-avoiding-environmental-calamity/

Confronting the environmental cost of marijuana
When thinking about agriculture’s environmental footprint, the usual suspects jump to mind: corn and cotton and soy, vast resource-intensive commodity crops. Marijuana isn’t high on the list. Yet perhaps it should be.
http://www.anthropocenemagazine.org/2017/11/the-environmental-cost-of-marijuana/

EU fails to agree on glyphosate license renewal
The European Commission has again hit a wall in renewing the approval for the weedkiller glyphosate. The vote comes after 18 months of agonizing over the controversial herbicide.
http://www.dw.com/en/eu-fails-to-agree-on-glyphosate-license-renewal/a-41308770

Behind the nuclear curtain: Fukushima explored six years on
Documentary makers entered the no-go zone to capture eerie images of the abandoned city of Fukushima, six years after its nuclear plant melted down.
https://www.dailymercury.com.au/news/filmmakers-document-fukushima-six-years-after-nucl/3260895/

Europe calls for cutting car emissions by a third. Not enough, critics say
The proposals by the European Commission, the European Union’s executive arm, drew immediate complaints that officials had buckled to pressure from Germany.
https://www.nytimes.com/2017/11/08/business/energy-environment/eu-cars-emissions.html?rref=collection%2Fsectioncollection%2Fbusiness-energy-environment

Breeding highly productive corn has reduced its ability to adapt
Stuck where they are, plants have to adapt to their environments, responding to stresses like drought or pests by changing how they grow.
http://www.enn.com/agriculture/article/53109

China’s Sulfur Dioxide Emissions Declined Significantly While India’s Grew Over Last Decade
Sulfur dioxide is an air pollutant that causes acid rain, haze and many health-related problems. It is produced predominantly when coal is burned to generate electricity.
http://www.enn.com/pollution/article/53107

Trump to world: Fossil fuels are good for you
Emily Atkin
No longer content to just deny climate change, the administration is now making the moral case for burning oil and coal.
https://newrepublic.com/article/145667/trump-world-fossil-fuels-good

Outrage will prevent a windfarm over the Bullecourt dead – but it’s missing elsewhere
Paul Daley
Where is the anger at Indigenous remains in museums after modern infrastructure disturbed traditional burial sites?
https://www.theguardian.com/world/postcolonial-blog/2017/nov/10/outrage-will-prevent-a-windfarm-over-the-bullecourt-dead-but-its-missing-elsewhere

Sharing economy sounds caring, but let’s put it to the ethical city test
Ralph Horne, RMIT University
In cities dominated by globalised market forces, how can we achieve social equity and justice? For any sharing economy idea, we need to ask what will it do to fix the big problems confronting us all.
https://theconversation.com/sharing-economy-sounds-caring-but-lets-put-it-to-the-ethical-city-test-87165

Professor says protected waters an opportunity for Indigenous empowerment
The author of a new study on marine protected areas worldwide says urgent action is needed in Canada to make sure Indigenous rights are included in the creation and management of ocean conservation measures.
http://thechronicleherald.ca/novascotia/1518740-professor-says-protected-waters-an-opportunity-for-indigenous-empowerment

New technology to detect sea pollution
A new technology aimed at detecting the levels of pollution in the sea and its potential impact on aquatic life and the surrounding ecosystem was deployed in the waters of the Gulf of Paria last month.
http://newsday.co.tt/2017/11/08/new-technology-to-detect-sea-pollution/

The evidence points in one direction – we must ban neonicotinoids
Michael Gove
With more and more evidence emerging that these pesticides harm bees and other insects, it would be irresponsible not to restrict their use
https://www.theguardian.com/environment/2017/nov/09/the-evidence-points-in-one-direction-we-must-ban-neonicotinoids

Unless we regain our historic awe of the deep ocean, it will be plundered
Laurence Publicover, Katharine Hendry
It seems almost inevitable that deep sea mining will open a new and substantial chapter of humanity’s relationship with the oceans.
https://theconversation.com/unless-we-regain-our-historic-awe-of-the-deep-ocean-it-will-be-plundered-84734