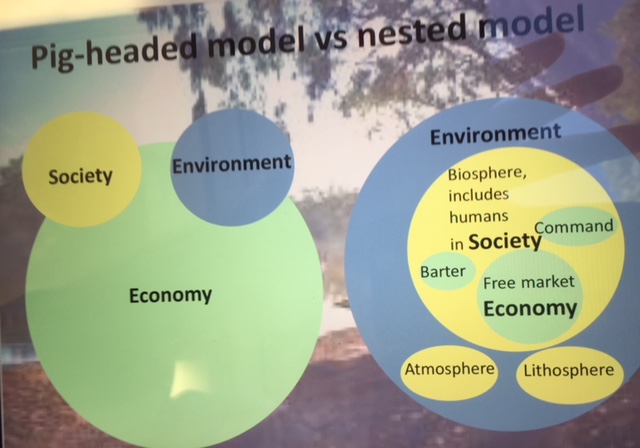 Water is a wholly-owned subsidiary of the environment. If there’s some available for the economy in whichever format we create it, it is available as a resource. The Gnats see it only as a resource, as Weatherill says, take water from them!
Top Post
Study shows climate value of earth’s intact forests
New research published today in Nature Ecology & Evolution demonstrates the extraordinary value of Earth’s remaining intact forests for addressing climate change and protecting wildlife, critical watersheds, indigenous cultures, and human health.
https://www.eurekalert.org/pub_releases/2018-02/wcs-ssc022218.php Today’s Celebration
Independence Day   Dominican Republic

Climate Change
Can throwing a tantrum help save us from climate change?
Climate scientist Michael E. Mann and children’s book author Megan Herbert want children (and maybe also adults) to learn that their voices can and must be heard.
http://therevelator.org/tantrum-climate-change/

It will be warmer at the North Pole next week than in much of Europe
The polar vortex split, and now the North Pole is comparatively balmy.
https://mashable.com/2018/02/22/north-pole-temperatures-above-freezing-europe-deep-freeze/#K3zLuLDMgOq3

National
Australia and East Timor agree on border, revenue from offshore gas fields
The two countries negotiate a treaty on their disputed maritime border in the Timor Sea, a territory that contains large amounts of gas and condensates which analysts previously estimated could be worth up to $50 billion.
http://www.abc.net.au/news/2018-02-26/australia-and-east-timor-agree-on-maritime-border/9486752

Surfers collect scientific data with Smartfin
Surfers become citizen scientists by attaching fins to their boards that collect data from the ocean.
http://www.abc.net.au/news/2018-02-26/surfing-scientists-collect-data-with-smartfin-technology/9481768

We’re here to listen, says ESB. But not to you
Students gatecrash Energy Security Board forum on National Energy Guarantee. But the promise to “listen” was only extended to industry participants, and even they warned about reduced competition and higher prices likely caused by an overly complex policy.
http://reneweconomy.com.au/were-here-to-listen-says-esb-but-not-to-you-11092/

Jaguar takes on Tesla, with all-electric SUV due in Australia October
Australia set to get a new all-electric luxury SUV on market in October, with launch of Jaguar Land Rover I-Pace.
http://reneweconomy.com.au/jaguar-takes-tesla-electric-suv-due-australia-october-17757/

EnergyAustralia IPO on the cards
EnergyAustralia has delivered its Hong Kong owner CLP Holdings a 64 per cent jump in net profit.
https://www.theaustralian.com.au/business/mining-energy/high-power-prices-help-energyaustralia-profit/news-story/74d576d0c0b3d03073969aebfd8ef550

Unfreezing discount rates: transport infrastructure for tomorrow
Grattan Institute
This report argues that Australia should revamp how it selects major transport projects, so that governments can better know which new roads and railways are worth building and avoid squandering billions of dollars of public money on the wrong projects.
http://apo.org.au/node/134201

Gold-plating energy markets? Even incumbents not comfortable with NEG
Giles Parkinson
Industry warns NEG too complex, likely to boost prices, cut competition. If it won’t reduce emissions either, what exactly is the point?
http://reneweconomy.com.au/gold-plating-energy-markets-even-incumbents-not-comfortable-with-neg-99133/

National Energy Guarantee leaves no guarantees
David Ryan
There are some significant issues still to be resolved around the NEG – complexity and potential costs are concerning.
http://reneweconomy.com.au/national-energy-guarantee-leaves-no-guarantees-40910/

Good governance must be the top priority
Roger Taylor and Ken Coghill
Poor governance of infrastructure projects is costing billions of dollars and delivering questionable benefits to the community
https://blogs.crikey.com.au/theurbanist/2018/02/26/good-governance-must-top-priority/

Victoria
Burning rubbish to generate energy, cut landfill has ‘broad support’
Burning waste and using it to generate energy is being touted as a viable alternative to landfill for Victoria under a proposal put before the State Government, but some locals in Melbourne’s west are concerned how pollution would be managed.
http://www.abc.net.au/news/2018-02-26/waste-for-energy-plant-for-melbourne-proposed/9482850

Plan to protect possum under cloud as timber industry seeks change
A review into the status of the Leadbeater’s possum will be completed in September, potentially clearing the way for more logging in the central highlands.
https://www.theage.com.au/politics/victoria/plan-to-protect-possum-under-cloud-as-timber-industry-seeks-change-20180226-p4z1u8.html

New South Wales
Constituents hope their new Deputy PM can sort Murray-Darling stalemate
Their local MP has just been chosen as Australia’s Deputy Prime Minister, but those in Michael McCormack’s New South Wales electorate have something else on their mind: water.
http://www.abc.net.au/news/2018-02-26/michael-mccormack-constituents-hope-he-can-sort-murray-darling/9484534

Australia’s biggest coal state, NSW, also biggest electricity importer
South Australia’s renewables grid is often criticised for relying on “imports” from other states. But no grid relies more on imports than NSW, the grid with the highest percentage of coal generation.
http://reneweconomy.com.au/australias-biggest-coal-state-nsw-also-biggest-electricity-importer-77443/

Don’t be afraid of growth, ut do build for it
Eamon Waterford
People are coming in droves to Sydney says the recent report from Infrastructure Australia. In fact, the figures are striking so, we’d better get busy building to meet the demand
https://www.dailytelegraph.com.au/news/opinion/sydney-needs-to-prepare-for-an-expected-population-of-about-75-million-by-2046/news-story/34d0d8d266ba38721ed4752504c3a94e

ACT
Canberra storm drains ‘unable to cope with major rain events’, report warned
Just weeks before a “1-in-100-year weather event” flooded some Canberra residents’ homes and brought parts of the city to a standstill, a report warned the capital’s stormwater drains would be insufficient in a major downpour.
http://www.abc.net.au/news/2018-02-26/canberra-emergency-services-kepy-busy-in-storm-aftermath/9483832

Queensland
Mareeba Shire Mayor backs Nullinga Dam study
Mareeba Shire Mayor Tom Gilmore has welcomed the Queensland Government’s decision to fund the next stage of the proposed Nullinga Dam project, saying the dam would be a viable and critical option for water security in the shire.
http://www.cairnspost.com.au/news/mareeba-shire-council-and-mayor-support-nullinga-dam-study/news-story/51e7c90d0bc27fcfb1b6449380bd89ce

We must not allow Brisbane to lose its soul like Sydney
John Birmingham
http://www.canberratimes.com.au/comment/blunt-instrument/we-must-not-allow-brisbane-to-lose-its-soul-like-sydney-20180226-p4z1ur.html

SA’s wind, solar use ‘leading the world’
South Australia’s renewable energy market has hit new heights, according to a report released today that claims our solar and wind generation is leading the world.
http://www.adelaidenow.com.au/news/south-australia/solar-energy-wind-power-use-in-south-australia-leading-the-world/news-story/47f6ad2ba008058c440dbf756ec45f6f

Tasmania
Call for Tasmanian parties to fix program leading to wildlife being euthanased
Injured and orphaned Tasmanian wildlife are being euthanased rather than rehabilitated and released into the wild because of problems with a government-run program, a sanctuary says.
http://www.abc.net.au/news/2018-02-26/bonorong-wants-next-state-government-to-fix-animal-welfare/9486204

Delving into the dirty side of your local weekly market
What impact are markets having on the environment? Volunteers in Darwin sort through mountains of coffee cups, plastics and food waste in just one weekend.
http://www.abc.net.au/news/2018-02-26/war-on-waste-market-impact-revealed-environment-centre-nt/9484530

‘Serious’ chemical concerns for Rapid Creek
The NT Environment Protection Authority is “actively investigating” a number of “serious allegations” about the use and disposal of firefighting chemicals at Darwin Airport
http://www.ntnews.com.au/lifestyle/serious-chemical-concerns-for-rapid-creek/news-story/5073149e607ddc003700991bf56522a1

Parap Garbage Audit
One tonne of waste, including more than 600kg of food scraps, lies in the wake of the weekly Parap Markets
http://www.ntnews.com.au/news/waste-piles-up-at-popular-nt-markets/news-story/bc3ac2977b385e9c3636d26b91925aa6

‘Made in China’ fashion goes green
Already a fast-fashion powerhouse, startups focused on environmental and ethical sustainability are now taking the country by storm.
http://www.ozy.com/fast-forward/made-in-china-fashion-goes-green/83285

Group pushing climate skepticism tries to save coal plants
The Heartland Institute is launching an initiative to save America’s ailing coal plants.
https://www.eenews.net/stories/1060074561

Fracking – the reality, the risks and what the future holds
Fracking has been hailed as an energy miracle in the US, yet globally it faces blocks and even bans. Adam Vaughan explains what it is and why it is so controversial
https://www.theguardian.com/news/2018/feb/26/fracking-the-reality-the-risks-and-what-the-future-holds

A new approach towards highly efficient and air-stable perovskite solar cells
Research into the use of perovskite materials as solar cells has boomed in the last several years, following reports of high energy conversion efficiencies, which have continued to climb. New research published in the journal Materials Today reveals how to improve the lifetime of these solar cells.
https://www.eurekalert.org/pub_releases/2018-02/e-ana022618.php

Global Fossil Fuel Emissions of Hydrocarbons Are Underestimated
Global levels of ethane and propane in the atmosphere have been underestimated by more than 50 percent, new research has revealed. These hydrocarbons are particularly harmful in large cities where, …
https://www.sciencedaily.com/releases/2018/02/180226131458.htm

Clever coating opens door to smart windows
Researchers from RMIT University in Melbourne Australia have developed a new ultra-thin coating that responds to heat and cold, opening the door to ‘smart windows’.
https://www.eurekalert.org/pub_releases/2018-02/ru-cco022518.php

South32’s shift away from thermal coal puts BHP to shame
Where South32 has moved to divest from thermal coal, BHP is increasing its exposure – and undermining its climate credentials.
http://reneweconomy.com.au/south32s-shift-away-thermal-coal-puts-bhp-shame-63970/

Energy storage leap could slash electric car charging times
Development of new material for supercapacitors has potential to raise range to that of petrol cars
https://www.theguardian.com/environment/2018/feb/26/energy-storage-supercapacitors-electric-car-batteries-charging-times

UN chief pushes for denuclearisation
The UN boss is pushing for a renewed effort to rid the world of nuclear weapons, saying it’s a “fallacious idea that nuclear arms make the world safer”.
http://www.heraldsun.com.au/news/breaking-news/un-chief-pushes-for-denuclearisation/news-story/b7d96d59ee7c170f66f6b91f9632aef5

Nature Conservation
‘A Bomb on the doorstep’: Venezuela fishermen fight an oil giant
For decades, a poor fishing village has tried to stop a state-run refinery from polluting a bay they share, but the battle has increasingly become one man’s charge.
https://www.nytimes.com/2018/02/25/world/americas/venezuela-fishermen-pdvsa.html