Ginkgo biloba is fast becoming a leitmotif for our times. The pleasing fan-shaped leaf is marching into the popular psyche. You’ll soon be asking yourself how come you don’t have a Ginkgo growing at your place? Look around and you’ll find yourself isolated and out of touch with mainstream Australia.

Just over the road from Victoria Market in Victoria Street, you’ll find a shopfront that features artificial bonsaied Ginkgoes. After the joy of finding them there subsided, I wondered how could one not favour a real Ginkgo over an artificial one? I relented in concluding that an artificial Ginkgo is better than none. After all, one must have a Ginkgo. 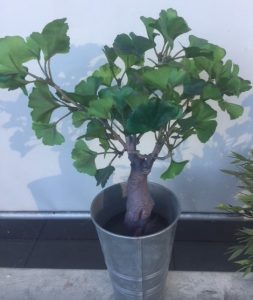 Then I pondered on the bonsai process. How could a Ginkgo be so constrained and contrived? How much better to let of grow tall and free? Then again, the shop-front was compact and again, a bonsai Ginkgo is better than no Ginkgo, I suppose.

The next bit of evidence for the inexorable rise of the Ginkgo was found in the most unlikely of places, the Spotlight Homewares chain. But they know a crowd-pleaser when they see one. Who wouldn’t find their meal enhanced when dining at a table graced with a Ginkgo tablecloth? 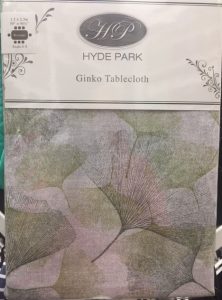 The last photo is of the glorious young(?) ginkgo at the Chinese Museum in Little Bourke Street, Melbourne. The museum was built in 1985 and in all likelihood, the tree dates from that time also. The association with the museum is obvious as Ginkgoes are native of China and some trees there might be 2,500 years old.  Very old Ginkgoes can reach a height of 50 metres, so perhaps bonsaiing isn’t always a bad idea. 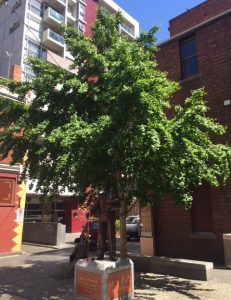