My ginkgos don’t usually get out and about much so today I took my last one, from the 15 or so germinated around 5 years ago from ANU seed, promenading with me to Vic Market this morning. 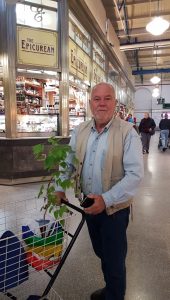 Well, it was not quite like that – I was meeting good friend Garry to give him the last of the trees for planting in his place at Kew.

Dog-walkers will tell how easy it is to strike up a conversation with another dog-walker. So too with a ginkgo. I was Dianne’s Delights, my favoured market delicatessen, when I was approached by a gentleman who admired the plant and we struck up an enjoyable conversation about ginkgos. He lives in Hawthorn very near where I planted a ginkgo in the early 1980s that is now around 5 metres in height. He then proceeded to introduce me to the dwarf cultivar ‘mariken’. 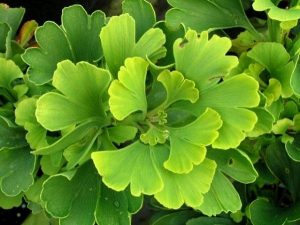 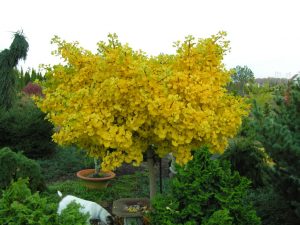 Found as a dwarf mutation by Piet Vergeldt, this dwarf ginkgo is one of the best.  The green spring and summer color is contrasted with a bright yellow fall color on this dwarf ginkgo tree. ‘Mariken’ is a miniature ginkgo tree that can reach 2.5 ft in height by 3 ft in width in 10 years. Often pronounced as our fellow southerners say “American”, this ginkgo is actually named after a dutch woman’s name. ‘Mariken’ is extremely resilient and easy to grow. In 2010, ‘Mariken’ won the Conifer of Year for the American Conifer Society.

Due to its miniature stature and dwarf habit, ‘Mariken’ is excellent for conifer gardens, small spaces, containers, miniature railroad gardens, and fairy gardens.

When I get around to growing more ginkgos, I will not, repeat will not, supply one for a miniature railway or fairy garden. The plant is too stately for such cartoonish nonsense.

Fast-growing-trees.com, a misnamed website if we are talking about ginkgos, features the following reference to a ‘mariken’.

This dwarf Ginkgo Biloba tree is an ornamental masterpiece prized for its compact stature and dense leaves. The ball-shaped Ginkgo Biloba ‘Mariken’ flattens as it grows, naturally spreading twice as wide as it is tall without any ties, wires or pruning.

The miniature tree retains the many charms of the towering Ginkgo Biloba, including long life and fan-shaped leaves that turn gold in autumn.

Then we were at our regular vegetable stall buying broccoli and bok choy when Eddie, a veritable enthusiast, bowled up and lovingly stroked the leaves of our promenaded ginkgo, saying the deep cleft in each leaf indicated that this was a female. Garry mightn’t be too happy at that, but it won’t bear seeds with the smelly butyric acid-laden fleshy covering for another 10 or 15 years at least. Eddie went on to extol the deepest of pleasures to be found in eating Durian Fruit, the renaming of the Bowen Mango to Kensington Pride, as the major shift in mango production saw the variety grown more often around Darwin and they weren’t so keen on a label that suggests that they were from Qld. He says that NT produces the best mangoes as their high temperatures are coupled with their low humidity and so the NT KP is the superior fruit.  Eddie gives talks on exotic fruits and nuts and it is  his life’s ambition, after his son finishes his education, to more to far north Qld and grow the world’s rarest fruits. Watch out for him in ten year’s time – Eddies’ rare fruits from FNQ.

We went on to Coffea for our regular meet-up and my baby was delivered. With the handing out of this, my last ginkgo I’m going to have to borrow one next week to take with me to market. The conversations are too good to be missed.