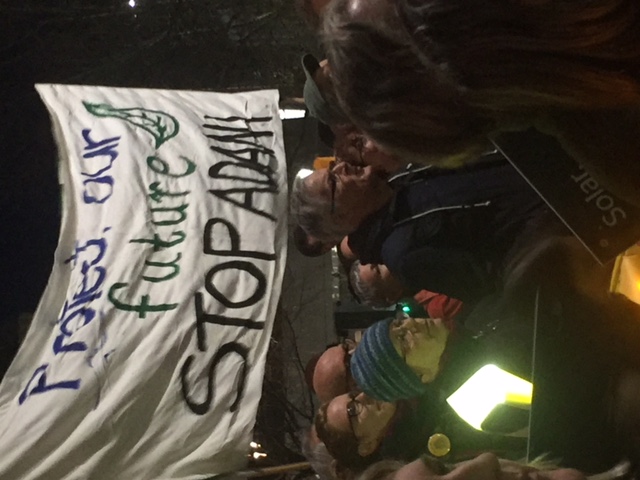 Some of the hundreds of thousands protesting this weekend about lack of fair dinkum responses to climate change and, in Australia, the danger of Adani’s mine going ahead. This was taken last night at the State Library in Melbourne.

Profits v planet: can big business and the environment get along?

Crowning of Vytautas the Great – Lithuania

Feast of Our Lady of Victories – Malta

Nativity of Our Lady – Liechtenstein

BBC admits ‘we get climate change coverage wrong too often’

Researchers say such tsunamis could pose an increasing risk in places like Western Canada as climate change melts glaciers.

How will rising temperatures affect your community? We mapped what the world will look like under current climate change projections.

Climate negotiator warns world ‘out of time’ to save islands

Island nations like Fiji and the Maldives are almost at the “point of no return” because of rising sea levels, a leading climate negotiator warned Friday.

Banks are just as much to blame for the climate crisis as fossil fuel companies and corrupt governments. Campaigning for fossil free finance must be the climate movement’s next step.

Prime Minister Scott Morrison will declare the National Energy Guarantee, which has divided the coalition, officially dead when parliament returns next week.

Farmers to flock to solar and battery storage, as power costs bite

ICAN Nobel Peace Prize Ride: On the road to a future free of nuclear weapons

Cycling through the green hills, surrounded by stately gums and wattle blossoms, it’s hard to believe that nuclear weapons pose a threat to everything we hold dear. Yet nine nations cling to 14,500 nuclear weapons, enough to annihilate our planet many times over.

How can we solve Australia’s threatened species crisis? With baking!

First Dog on the Moon

Rough seas ahead for the Pacific Islands Forum

Tension around China’s spread in the Pacific was clear at this year’s forum, but not even that could distract from Australia’s climate change and refugee controversies.

As the change of leadership steers the Australian government even further from action on climate change, the Coalition’s efforts to appease the powerful domestic fossil fuel industry could jeopardise trade deals with the European Union.

Australia gets out the wrecking ball, again, in international climate talks

Well, that didn’t take long. Little more than a week after the elevation of Scott Morrison to the prime minister’s office, Australia has returned to the bad old ways that were a feature of Tony Abbott’s engagement on climate change, and John Howard’s involvement with Kyoto.

Stability in energy efficiency markets came to an abrupt end in August due to concerns about future supply from residential sources, the Victorian election and solar hot water policy…

‘Do you have any clue?’: NSW minister unable to answer WestConnex questions

In what has been described as an “embarrassing” performance, the NSW Roads Minister gave a blank stare and deflected questions on a WestConnex interchange, despite her department being responsible for its funding.

Widespread land clearing is threatening the koala population, according to a new report that examined satellite images of native bushland being bulldozed in northern New South Wales.

Genex buys 50MW solar PV project in NSW that was to be part of a world-leading hybrid facility combining solar thermal and storage with large scale PV.

‘We have to be ready’: Climate change report warns of increased fire, flood risk

An increased risk of fire and flood across Queensland will put extra demand on emergency services and require a “significant financial commitment”, a new climate change strategy warns.

After a mass coral bleaching in 2016, the world’s largest living structure is showing signs of a comeback.

Banking on the reef

Australia should take care to avoid the same mistakes with our national treasures so the tragedy of Brazil’s national museum is not repeated.

The former state Environment Department boss sacked by Steven Marshall as part of his initial public service cull has landed a new job – with a mining company.

Scientists want to train this puppy to save endangered owls

Masked owls are endangered in Tasmania but very hard to monitor in forests.

As lawsuits against Bayer pile up, farmers fear ‘vital’ Roundup will be killed off

The world’s biggest farm chemical company, Bayer, is facing billions of dollars in lawsuits after a US jury found last month the weed killer Roundup caused a school groundsman’s cancer, prompting fears among Australian farmers that the chemical will be banned or restricted.

What is the situation at Russia’s biggest dump site for spent nuclear fuel?

There is growing concern in nearby Norway about cooperation over the cleanup of Andreeva Bay.

Is PFAS the DDT of this generation?

The US Environmental Protection Agency has known for decades it could have a PFAS problem on its hands, and now hundreds of communities across the US are finding the chemicals in their water.

We must challenge the corporations that urge us to live in a throwaway society rather than seeking ‘greener’ ways of maintaining the status quo.

Profits v planet: can big business and the environment get along?

Elon Musk and the revenge of the Tesla sceptics

Elon Musk is arguably the biggest disruptor of our time, commercialising the electric car, the Tesla. But it is his disruption of conventions associated with managing the information flow in his sharemarket-listed company that has found him fighting the mother of all legal battles this week.

Bees are dying at an alarming rate. Amsterdam may have the answer.

Alarm bells are sounding globally over the disappearance of pollinators, but the Dutch capital has proved to be a success story.

A recent Harvard University study has proven what anyone who has ever worked in an open-plan office already knows to be true: they’re terrible!