The saga of the kalka bloody doon

In planning our Mt Isa trip before he died, Philip had set us the challenge of seven
species in particular from the list of fifty birds that we should see. Two of these species were grasswrens, acknowledged as the most difficult group of birds in Australia to see, so we couldn’t say that we were unmindful of the challenge. His notes even told us where we should go to see them – Pamela Street on the edge of the Mt Isa township for the Kalkadoon grasswren (Kalks to those in the know), McNamara Road out of town for the Carpentarian (Carps) grasswren.

On our first morning in Mt Isa and in bright spirits and brimming with confidence, pencils already sharpened for the tick, we parked at the end of Pamela Street and strode purposefully into the spinifex. Actually, we strode into the Triodia, common name Porcupine grass, but almost everyone calls it spinifex, so taken are they with the first syllable as the spines pierce trouser legs and the skin within. We were taken with the spines as we scrambled up the loose rocks, not always seeing our footfalls as we were focused about 3 – 5 metres ahead, anxiously scanning for movement that would betray the presence of the low to the ground grasswrens. 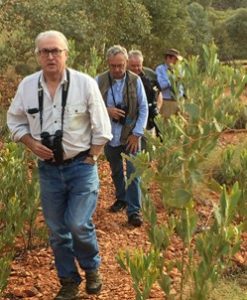 Loudmouths take up the serious business of chasing Kalkadoon grasswrens

Without a firm footfall, we would invariably slide into a hummock of spines – but a loudmouth is not a wuss, so keep going we did. The hillsides were steep, the rocks were slippery and the triodia was sharp and even worse, the Kalks were absent. 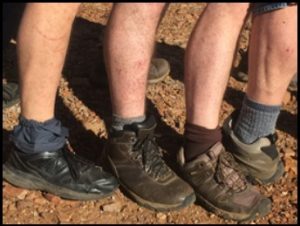 Loudmouth legs bearing the scars and pricks of the chase

The usual strategy is to listen for them, but this was not the best idea for the loudmouths. The call of the kalk is a very thin, reedy, high-frequency call, beyond the hearing range of most of us already well into male age-related hearing loss. For around two hours, we blundered up and slid down the rocky slopes beyond Pamela Street until, with punctured legs and punctured confidence, we slunk away and drove out to Lake Moondara, where we could readily tick our first of the seven, a much sneered at plastic, the Peafowl. For Australian birders, this species is tickable as there has been an independent breeding population at the lake for more than twenty years, thus satisfying all of the criteria for tickability. So hey, it is one tick, just as a Night parrot is one tick. 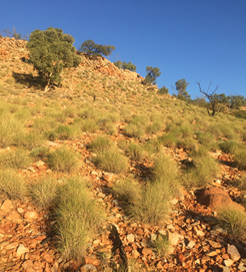 The next day we drove out to the next sites that Philip had picked out for us, Mica Creek and then Sybella Creek. Here we looked for Kalks on, yes, spiny triodia and loose scree. The morning was a repeat of the previous day. No kalks but plenty of sliding and plenty of piercing. For around two hours at each site, we scrambled up and down the slopes, ridges and creek beds with nary a sight of a grasswren.

We went back to Pamela Street that afternoon and continued our fruitless search and fruitful gathering of piercings. Another two hours to the Kalks.

It was time to call in support. I was a member of the facebook account Grasswrens of Australia, a group of around 1,000 obsessives who would no doubt be fabulous dinner guests who’d make any conversation sparkle. Was the Pamela Street site still good, would it be a problem for grasswrens that there was no seed in the seed heads and what was the best strategy in looking for them? I received a number of quick replies – Pamela Street is THE site for Kalks, they are omnivorous so lack of seed is not the reason you’re not seeing them and the strategy for finding them is persistence, persistence and persistence. Yeah, thanks!

It was time to look for more of the seven so we travelled the 350 or so Kms nor-nor-west of Mt Isa to Boodjamulla with a Carps site on the way. But first and also on the way was another Kalks site. We spent a fruitless hour looking at the Optus phone tower, where the triodia was just as sharp but the slopes a little less precipitous. It was time for a change.

We turned off onto MacNamara Road to look for Carps. We fanned out across the gentle triodia covered rises to maximise the search effort when Max yelled out ‘I heard a grasswren over here’. The other four converged on the spot, jumped the creek-bed, clambered over rocks, dashed through triodia and chased a small group of carps for two hundred metres or so.

They would break cover every so often just to keep us keen until one of them, probably sick of teasing us, flew up into a dead shrub and sang out in triumph at leading us on a merry chase. Oh how we high-fived for a tick – and a grasswren! 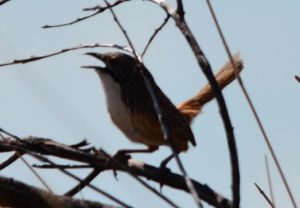 Morale was still at swelled-head level at a river crossing where Purple-crowned fairy wrens darted in and out of the reeds. Here was tick three. We ticked our fourth species, a buff sided robin in the tall trees along the river at Boodjamulla. 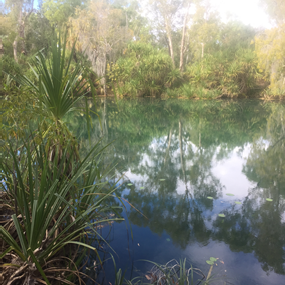 Where there was water, the vegetation was lush and the birdlife prolific

Two days later we ticked the fifth at the Riversleigh Fossil Site Visitor Centre when we found, not without incident, a confiding Sandstone shrike thrush. We drove to Cloncurry to a site that Philip had picked out at Corella Dam for our sixth tick, a Pictorella manikin. 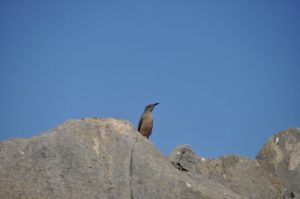 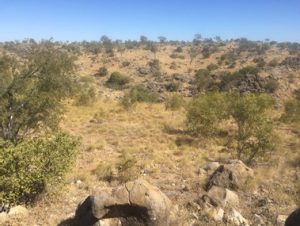 The rocky country of the Riversleigh fossil site

On the way back to Mt Isa, we called in to yet another site for kalks at Warrigal Waterhole. We found a goshawk with its leg so far embedded into the breast-muscle of another goshawk, which had had its head gnawed off, that its entanglement was complete. Max deployed his versatile Leatherman and with Russell as nurse, freed the goshawk that still had its head, if not its dignity, and after a short while, it flew off no doubt to continue its depredation on local birds. 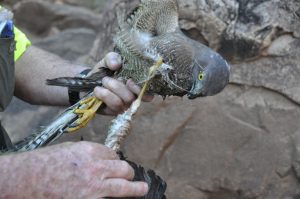 A goshawk in a most unusual predicament

As we drove out along the extremely rough bush track, we met a lone birder, an
Englishman, who had just ten minutes before chased a kalk in some spinifex on rocky scree. He pointed out the direction in which it had gone and we keenly spread out along the contour to search. Alas and yep you guessed it, another hour of our lives we’ll never get back and another victory to the kalks. So far about fifty loudmouth hours had been spent on this frustrating chase.

Someone told us you can see them right throughout the day. telephone towers. We were told that sometimes they’d be skipping around our feet. We were told so much stuff and nonsense.

We received a text message from a birder that we had seen at the Pamela Street site a few days earlier that she had found kalks at Black Star Terrace, a street at the other end of Pamela Street. She even included GPS coordinates. First thing next morning, there we were, right on the designated spot – but of course the kalks weren’t. We drove out to the Warrigal Waterhole site and spent another two hours searching the slopes there and then another hour on the other side of the track on the slopes there. It is now Wednesday, there’s only Thursday and two of us are leaving first thing on Friday. Morale was possibly slipping by this time.

That afternoon, we went back to Pamela Street and walked the two (ish) kilometres of the length of the gully to Black Star Crescent and if the kalks were watching us, they didn’t let out as much as a squeak. No kalks.

Someone else said that you had to be there at dawn. We were told you could see from the track up to the 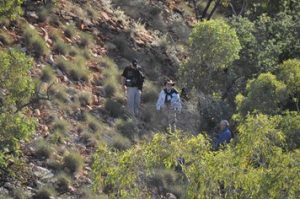 Thursday morning saw us back at Black Star Terrace, at the GPS coordinates and then beyond. We slipped up this side of the gully, we scrambled up that side of the gully, we walked in the bed of the gully, we walked along the ridge above the gully. I was on one side, Max was on the other. The others were at various spots between. Max saw a Spinifex bird (well, they should be Triodia birds) dart between hummocks and chased it up towards the ridge to get a photograph. He reached the top of the slope and we heard a very loud yelled ‘they’re up here’. 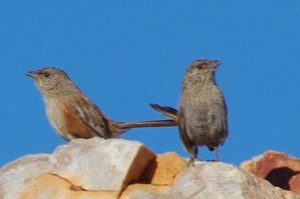 There was an immediate response. Loudmouths showed agility of decades earlier in dashing, skipping, almost teleporting to reach the spot where Max stood. And there they were – two Kalks (a male and female, so we could see them both in their respective glory) flitting from atop a rock, to another rock, to a dead-leaved shrub, back to a rock, turning this way, turning about, one alighting beside the other. To the incessant sound of camera shutters, we watched and watched and watched. They were glorious in their subtle shades of umber and the female with rufous flanks. We drank them in.

We watched for fifteen or twenty minutes – we had crippling walk-away views. We found kalks! As we levitated along the ridge line back to the vehicle at Black Star Crescent, another pair barred our way. Where were these buggers these last five days? No matter now, for another ten minutes, we marveled at the splendour of the Kalkadoon grasswren. 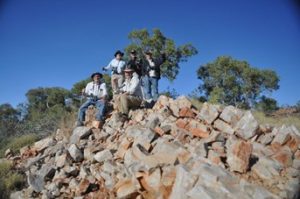 Tick seven and Philip, we trust that we did your research proud. It took us ninety-five loudmouth hours, but we found them. 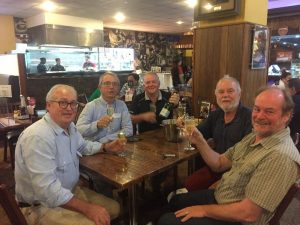