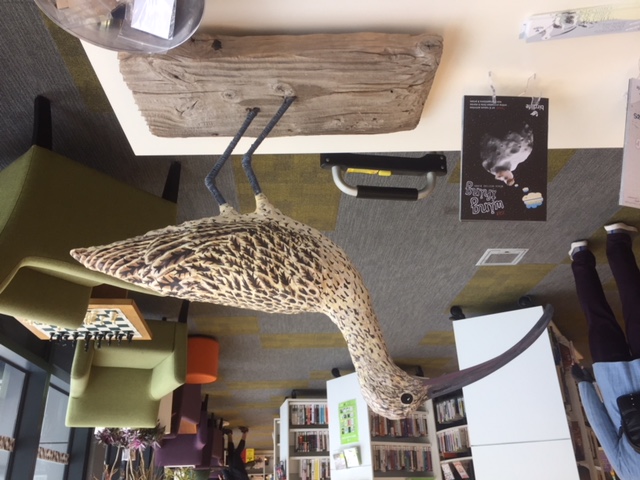 Happy World Migratory Bird Day today, everyone. This is sculptor and ex-Museum staffer John Kean’s Eastern curlew, a species that has declined 80% in the last fifty or so years. The human numbers at the celebration today at Newport show many aren’t happy about that decline.

How much does the world subsidize oil, coal, and gas?

A new report says that the world subsidized fossil fuels by $5.2 trillion in just one year. But that calculation is less tidy than it seems.

Eat What You Want Day

Climate change and health: Chronic kidney disease is on the rise

Our kidneys might be vulnerable to the more frequent extreme heat brought on by global warming.

Researchers plan for new centre to explore refreezing the poles, sucking out CO2 and ocean greening.

I have felt hopelessness over climate change. Here is how we move past the immense grief

Australians were keen to talk about climate change and civil rights on social media in the fourth week of the election campaign.

Environment policies get $1b under Labor

Labor would save $448 million over four years by scrapping the coalition’s climate solutions fund, the opposition’s costings show.

This election, is anyone thinking about waste and recycling?

It’s a topic that hasn’t gathered much attention on the campaign trail, but based on the large number of questions we received through You Ask, We Answer, waste and recycling is something many voters are concerned about. So do the parties have a plan? And is it enough to make a difference?

QBE has acknowledged dissatisfaction over executives’ pay packets and avoided a second strike against its remuneration report at its AGM on Thursday.

Solar energy is on the rise, but are we ready?

While Canberra is debating whether we should increase our uptake of renewables, homeowners, businesses and state governments are voting with their feet. But what do increasing levels of rooftop and large scale solar mean for the grid?

Scott Morrison says an electric vehicle can’t tow a boat. Is he correct?

RMIT ABC Fact Check looked at the Prime Minister’s claim that an electric vehicle won’t tow a trailer and is not going to tow a boat, and found it needs a tune-up.

A report claims koalas are ‘functionally extinct’ – but what does that mean?

The Australian Koala Foundation announced on Friday they believe “there are no more than 80,000 koalas in Australia”, making the species “functionally extinct”.

The Grattan Institute estimates the Coalition government’s actions may only reduce household power bills by 3.1 per cent.

Revenue to be cut on power leak [$]

Developers of solar and wind farms face a cut to revenues following a final ruling.

Labor has savaged the Coalition’s promise that it will slash power bills by up to 25 per cent should it win the election.

Australia’s spot carbon price is lower than overseas markets, but future prices will depend on the level of ambition in emission reduction policies.

The Federal Labor Party has released its budget costings ahead of the 2019 election, promising to deliver bigger budget surpluses and revealing that it will abolish the Coalition’s re-badged “Climate Solutions Fund” and redirect funds to new clean energy initiatives.

Angus Taylor and Tony Reid: Joined at the business hip

More questions have been raised in the Watergate scandal as Jommy Tee and Ronni Salt uncover the partnership between Angus Taylor and Tony Reid in an IA exclusive.

Are the Nationals still the party of the bush? [$]

With the election poised to be a referendum on climate policy, the junior Coalition partner finds itself out of touch with voters, even in its traditional strongholds.

The mismanagement of the Murray-Darling Basin has become a national issue in 2019. While the Basin’s problems are widely discussed, solutions are not. This paper outlines some practical steps to turn around the fortunes of the Basin and its people.

Australia’s peak marine conservation group has today released its detailed assessment of the Great Barrier Reef policies of Cairns election candidates ahead of the Federal vote on May 18.

Climate change and energy have dominated this federal election campaign. But among the noise and bluster, there’s one area that both parties have been notably silent on – support for local governments to tackle climate change.

As climate change becomes more important this election, the Liberals are caught in a tough spot. Now Labor’s latest line has the potential to do real damage

Murdoch media and the myth about Tesla EVs causing blackouts

Murdoch media and the Coalition have plunged the depth of stupidity in their campaign against EVs, but the prize goes for the claim that Tesla EV charging is already…

Phillip Island penguins rescued from a Melbourne home have been taken to a nature park to continue their rehabilitation.

Powerful owls are feeling the housing pinch in Melbourne

Even for one of Australia’s most fearsome predators, raising a family on the outskirts of Melbourne can be a struggle. The powerful owl is an icon with an uncertain future.

Victorian beaches have been blanketed in hail as the state shivered through its coldest day of the year.

Rolling on a River: Catching waste with waste

In the gardening world, the vegetative part of fungus tends to be an out-of-sight thing.

Anger as Grampians ‘shut to climbers’ [$]

Parks Victoria has closed more than 500 square kilometres to climbing and started handing out $1611 fines, imperilling the sport and casting a shadow over a multimillion-dollar adventure tourism attraction.

The restart of Sydney’s desalination plant is proceeding faster than expected, helping to slow the drawdown of the city’s reservoirs amid the ongoing drought.

NSW farmers are concerned that a federal Labor government’s crackdown on land clearing could affect their livelihoods.

ESCO Pacific plans to build a 100MW solar and battery power station near West Wyalong have won approval from the state government.

Labor is promising a $1 million investment in Canberra’s wetlands hailed by conservation groups as a “stunning” commitment to the city’s natural environment.

The promise of creating jobs and delivering cheaper power to northern Queensland is one the voters of Collinsville have heard many times.

A mysterious environmental group fronted by dubious online identities — including one endorsed by a former Liberal party staffer — spends more than a year trying to forge ties with the Adani protest movement while urging activists to target Clive Palmer.

Labor will be ‘destroyed’ by Adani in central and North Qld [$]

Adani’s $2 billion Carmichael mine won’t go away for the ALP ahead of next Saturday’s election.

Premier Annastacia Palaszczuk refused to put a figure on any Queensland government contribution to a future $114 billion project to connect Melbourne and Brisbane with a high-speed rail link.

The Environment Protection Authority says tests have revealed toxic chemicals in groundwater in a number of suburbs in Adelaide’s northwest.

South Australia’s coal-fired electricity industry is in its final chapter, with the sale of the 65-year-old Port Augusta power station site expected to reach settlement by the end of the month.

Mutton birds can fly more than a million kilometres over their lifetime, but at the moment they’re having trouble flying north for the winter.

Marine parks off Tasmania’s coast will have no impact on recreational fishing under federal Labor’s plans, Leader Bill Shorten insists.

The Coodardie cattle station may not be the most likely place to find a farm in sync with nature.

Croc of shit! Salties taking over our sewers [$]

A long-running urban legend has it that there are alligators in New York City’s sewers. Well, bugger your urban legends. There are definitely crocs in our city’s sewerage system. Because … Darwin

W.A. government to install 4MW of solar across six remote indigenous communities as part of an $11.6m budget plan to slash use of heavy-polluting – heavily subsidised – diesel…

Deal will improve handling of plastic waste and prevent it from getting washed or dumped into oceans and rivers, UN says

Six times more plastic waste is burned in U.S. than is recycled

An engineer explains why recycling is busted in America.

Going zero waste is a lot of work. Does too much of it fall to women?

The zero-waste movement is about cutting down on packaging, but is it creating more pressure on women?

New York has adopted a rule that will eventually kill off its last coal-fired power plants standing.

Penguin poo is the key to thriving life in Antarctica, scientists find

The heavily fortified Korean Demilitarised Zone which separates the two Koreas proves to be an ecological treasure as researchers confirm a sighting of an extremely rare Asiatic black bear cub.

Business in the age of mass extinction

Do you know your biodiversity footprint?

Stop eating fish. It’s the only way to save the life in our seas

If governments won’t take on the lethal fishing industry, we must.

Bill McKibben and Elizabeth Kolbert on the U.N. Extinction Report

While the political tide could be turning on climate change, both writers worry that it is too late.

Heat-tolerant corals can create nurseries that are resistant to bleaching

A new study found shallow water corals with high temperature tolerance in their DNA. Could they make reefs more resilient to climate change?