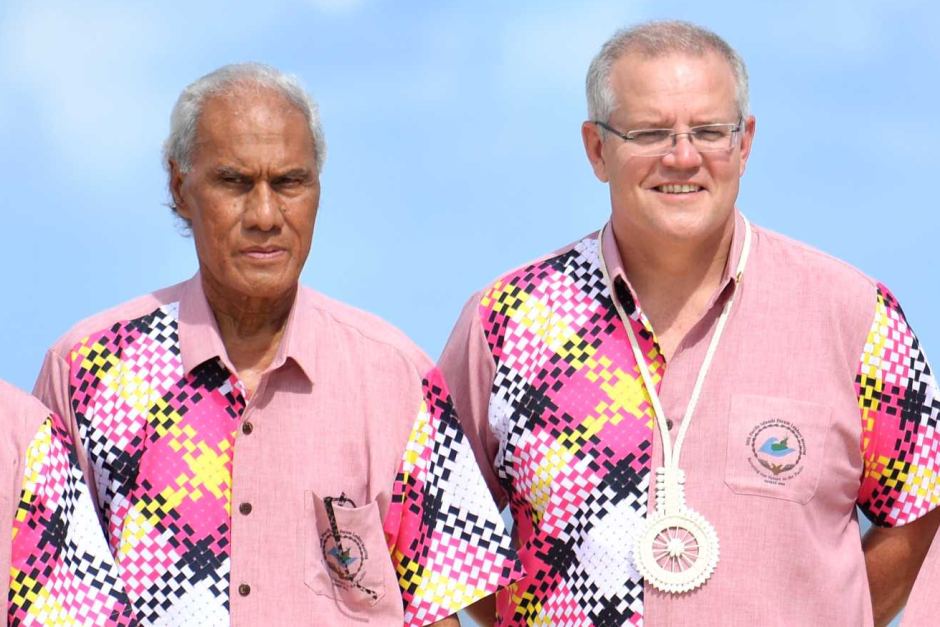 The photo says it all really – grim determination versus vacuous gormlessness. The Clapper is trying to ‘save’ (arguable in the extreme – how many jobs in a renewable energy-leading country?) the economy, the leader in the photo is trying to save his people.

Scientists find an abundance of tiny plastic particles in Arctic snow, indicating that so-called microplastics are being sucked into the atmosphere and carried to some of the most remote corners of the planet.

“We tried our best,” says Tuvalu’s Prime Minister after the hopes of smaller Pacific nations to get fully endorsed on their declaration for climate change are dashed.

Pacific nations borrowing from China ‘on backs of coal-fired everything’, NZ says

Shock news — the ABC’s fact checker has found in favour of a Coalition climate sceptic.

The U.S. left a hole in leadership on climate. China is filling it

Often considered the bogeyman of global climate diplomacy, China is making greater and faster strides than expected away from fossil fuels – becoming the world’s largest investor in solar and wind technology and boasting more jobs in solar energy than in coal-mining.

Ms Ardern’s opportunistic climate lecture is based in fantasy.

Science plays a vital role in maintaining sustainable fisheries, so this National Science Week the Australian Fisheries Management Authority (AFMA) is highlighting its progress on investigating how Commonwealth fisheries can adapt to the effects of climate change.

Planned new roads and other major projects are in danger of cost blowouts and long delays amid a deepening skills shortage and increasing competition for construction resources.

Ooshies: the natural habitat for these plastic Lion King figures is landfill – in pictures

The Future Landfill project is designed to make an environmental statement about Woolworths’ Lion King ooshies.

The head of Australia’s largest waste disposer has defended his company’s results after investors punished Cleanaway Waste Management’s downgrading of expectations for the coming year.

At the very foundation of the Greens are many of the maladies that afflict them today. Paddy Manning’s new book lays them bare.

How we get ourselves out of energy chaos [$]

Enough time has been wasted. The transition to a zero-carbon energy system is not simple, but what we need to do is very clear.

History shows that a much smaller population could indeed survive in Australia without using mineral hydrocarbons, but life with zero man-made emissions would be grim.

Public Transport Victoria breached privacy laws in 2018 by publicly releasing “de-identified” data, which researchers were able to use to identify a Victorian MP by linking travel data to some of his tweets.

The death of one of the fiercest advocates for changing the name of the Mid Western Highway to Wiradjuri Way prompts renewed calls for change.

Brimbank Council continues to fight to save Stony Creek in Sunshine North.

Environment Minister Lily D’Ambrosio was told two years ago by recycling company SKM that it was already storing thousands of tonnes of waste in warehouses across outer Melbourne.

The reported hunting of Victorian wombats by Chinese high rollers has prompted an investigation into the animal’s protection.

Victoria parliament decides to hold its own nuclear power inquiry

Liberal Democrats motion to hold a 12-month inquiry into nuclear power for Victoria has passed the state Parliament’s upper house.

The dams serving metropolitan Sydney will sink below 50 per cent full for the first time in 15 years by the weekend, with long-range weather forecasts suggesting the slide could accelerate.

Whitehaven Coal will issue a special dividend after notching up a record full-year profit.

The capital’s environmental watchdog issued six fines and made one prosecution between July 2017 and June 2019, despite receiving nearly 6000 complaints.

Multiple Queensland Fire and Emergency Services (QFES) crews are currently on scene at a vegetation fire burning near Dr Mays Crossing Road and Palm Springs Drive, Kinkuna. This fire broke out earlier today and is posing no threat to property at this time

The Queensland government has a back-up option if its shark control program appeal tanks.

Tourists are flocking to this coastal hotspot, but the sewers ‘clog up’

A new revamp of a boutique eco-resort is just the latest in a slew of projects in the development pipeline for the region surrounding Tasmania’s Freycinet National Park, home to Wineglass Bay — but locals fear the area is already buckling under the weight of the tourism boom.

How we learned Inpex was boiling PFAS

The fine paid by Inpex for boiling of PFAS-contaminated wastewater in Darwin came to light through an Australian Conservation Foundation investigation, it has now been revealed.

Climate change protesters halt proceedings in the Legislative Assembly by chanting and throwing materials from the public gallery, as more than 200 rally outside Parliament.

Scientists find an abundance of tiny plastic particles in Arctic snow, indicating that so-called microplastics are being sucked into the atmosphere and carried to some of the most remote corners of the planet.

The Malaysian government has confirmed that Lynas Corp will not be required to export more than 450,000 tonnes of radioactive waste to keep its licence to operate in Malaysia, but the company will need to pay a levy while it continues to process the waste there.

Russia’s “new” missiles are a throwback to the early days of the Cold War. And back then, it was the US that developed a nuclear-powered cruise missile.

The sight of grown men opting for hair-dryers rather than towels at the gym says a lot about where we are with environmental complacency, and why climate shaming isn’t such a bad idea.

It’ll be hard, but we can feed the world with plant protein

Shifting agriculture away from low-protein cereal crops towards legumes is essential.

What is the ‘salmon cannon’ and how do the fish feel about it?

A video showing a cannon shooting fish over a dam went viral – but how does it work? CEO and inventor of cannon has answers

The Environmental Protection Agency is backtracking on a controversial proposal to allow the use of cyanide bombs to kill wild animals in an effort to protect livestock.

We lost our tail millions of years ago, but researchers want to put it back

Dubbed Arque, the grey 1-metre device mimics tails such as those of cheetahs and other animals used to keep their balance while running and climbing, and could be used to keep Japan’s ageing population mobile.