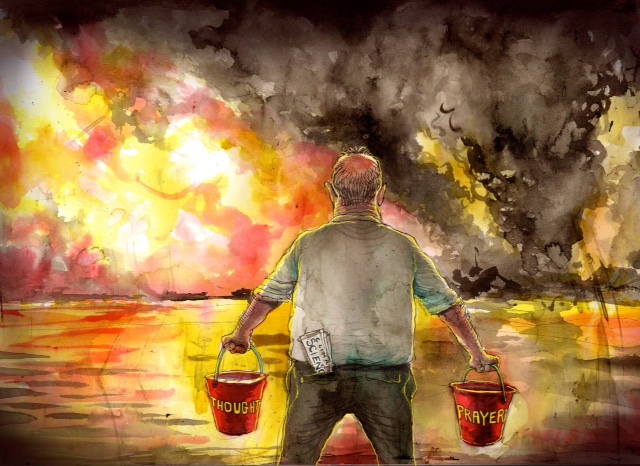 Our water supply is out of sight, out of mind. And that’s a big problem

Although Australia is often devastated by drought, it’s very unlikely that you’ll turn on the tap and find no water comes out. But we can’t afford to keep taking it for granted — we must change how we think about water.

Heir to the Throne Birthday – Tuvalu

Climategate 10 years on: what lessons have we learned?

A series of leaked emails was leapt on by climate-change deniers to discredit the data, but their efforts may have only slowed the search for solutions

A war of words has broken out about the link between climate change and the unprecedented bushfire emergency that has hit NSW and Queensland.

If an administrator cannot find a new owner for the Northern Endeavour oil platform, oilfields in the Timor Sea may have to be decommissioned at an estimated cost of $200 million — which the federal government may need to pay.

Inside Market Forces, the small climate group Scott Morrison wants to put out of business

From humble beginnings, Market Forces is now in the crosshairs of the Coalition’s war on environmental boycotts

‘Responsible thing to do’: Qantas pledges zero net emissions by 2050

Qantas will pledge to cut its net carbon emissions to zero by 2050, breaking ranks with its global airline peers at a time when aviation is under unprecedented scrutiny over its contribution to climate change.

McMansions no longer topping the menu as new houses slim down

New, free-standing houses are now the smallest they have been in 17 years as part an accelerating trend that is placing pressure on struggling property developers, builders and retailers.

Greens Leader Richard Di Natale has weighed in on the bushfires raging in NSW and Queensland, linking them to climate change.

A controversial overhaul of the power grid, including solar and wind developers paying part of transmission costs, has been savaged by the renewables industry which says it will kill investment and increase costs to big electricity generators at a critical time as ageing coal generators exit the ­system.

Our water supply is out of sight, out of mind. And that’s a big problem

Although Australia is often devastated by drought, it’s very unlikely that you’ll turn on the tap and find no water comes out. But we can’t afford to keep taking it for granted — we must change how we think about water.

Australians rightly mock this platitude when it’s rolled out by politicians after a mass shooting in the US, but now our own Prime Minister saw fit to present this meaningless line for victims of the bushfires on the mainland.

A local mayor can see we face a climate emergency, why can’t the PM?

Asked if there was any link between climate change and the fires, the Prime Minister dodged the question.

Another COAG meeting, another limp swing at the waste problem

An inconclusive COAG meeting comes after years of inquiries, announcements, initiatives, investigations and reviews. Australia is no closer to actually tackling our waste problems.

Climate of panic is the real fear [$]

Geologist Pawel Edmund Strzelecki was the first European to climb Australia’s highest peak which he blessed with the near-unpronounceable name of a Polish compatriot.

On a recent Saturday afternoon, pharmacist Viviene Ho was frantically pulling medicines from her refrigerator and packing them in ice. “We have to get these out before the power goes,” she said.

Wasting our good will [$]

‘These jobs are secure’: Andrews brushes aside union attack on logging

Premier Daniel Andrews has brushed aside a savage union attack about his decision to ban native logging and rejected criticism that the move would threaten 1000 jobs at a major paper mill.

‘Long, hot, dry and dangerous’: Where in Victoria is risk greatest this bushfire season?

As fatal bushfires rage across other parts of Australia, authorities have declared a total fire ban in Victoria’s Mallee region.

Spot electricity prices in Victoria rocketed higher in 2018-19 as surplus generation shrank, despite the increase in renewable power.

Opinion We’ll get an airport rail link but it will be a huge waste of funds if it isn’t fast, regular and value for money.

Tuesday looms as a day of “catastrophic” fire danger for the Greater Sydney and Greater Hunter regions.

Due to the current fire emergency, the NSW National Parks and Wildlife Service will expand closures of national parks and reserves, including tracks, trails, campgrounds and picnic areas across the Central Coast, Hunter, Mid North Coast, North Coast and North West of the State from Monday 11 November 2019 until further notice.

The Berejiklian government will pause new approvals for coal mining under Sydney’s drinking water catchment until well into next year as it considers an advisory panel’s report into the impact of mining on water supplies.

NSW bushfires: Koala population ‘like in a cremation’ after blazes

The number of rescued koalas from fire-hit regions around Port Macquarie has jumped to 16 as wildlife supporters scour key areas that were some of the best habitat for the marsupials in the state.

NSW Labor has called for parliament to be suspended next week as the state battles unprecedented bushfires.

Among the death and destruction, stories of extreme survival and heroism are emerging — some involving our four-legged friends. But the total body count for local fauna so far is “incalculable’’, experts say.

NSW consumers could be overcharged hundreds of millions of dollars for a power line that brings wind-generated energy from South Australia and, in return, sends them our coal-fired electricity.

Drought may force mines to shut down [$]

In a harbinger of what could be in store for the resources sector, a NSW miner says it could run out of water by February, after the state government introduced new restrictions in response to the savage drought.

This is not normal: what’s different about the NSW mega fires

For years, visitors to the National Arboretum have been able to stop and look and smell plants and trees from around Australia.

Canberra is home to the biggest houses but the smallest units, new report shows

Canberrans are building the biggest houses in the country, but the smallest apartments, following a trend that shows no signs of slowing.

Have your say on the five green bridges proposed for Brisbane

Five new bridges promised for Brisbane will be a “dog’s breakfast” if the council’s signature infrastructure project on Kingsford Smith Drive is a sign of what is to come, Labor claims.

Rail upgrade could still be a decade away

One of the biggest public transport transformations in south east Queensland history will take place over the coming decade but the Cleveland line does not seem to be a part of it.

It makes a mockery of Queensland’s judicial system that judges are drastically reducing the fines of disruptive anti-Adani protesters on appeal.

We should cash in from desal salvo [$]

The white elephant that was our desalination plant is set to become key in the country’s plan to tackle the drought and leaves SA poised to cash in at the negotiating table.

Australians to shoulder the risk of oil and gas exploration while Norway enjoys the financial gain, Australia Institute warns

Desal and no more dust: Plant firing up [$]

The Premier says the long-dormant desalination plant has been a white elephant too long, but is impressed by the water it’s about to start churning out this week.

The true size of our feral fish problem [$]

Anything over 150kg of carp per hectare is a threat to the environment. The Murray in SA has more than three times that much.

Hazardous levels of air pollution are continuing to persist in India’s northern states. Citizens are looking to governments to urgently tackle what has now been officially declared as a public health emergency.

Can laboratories curb their addiction to plastic?

Research scientists have largely gone unnoticed as major users of unrecyclable material. Now some universities are helping them kick the habit

Construction has reportedly begun in Iran on a second nuclear power reactor at its Bushehr plant.

The hidden cost of gold: Birth defects and brain damage

Indonesia’s mercury trade is intertwined with illegal gold mining around the world, leaving a legacy of thousands born with birth defects and half a million people poisoned.

What are PFAS chemicals, and should I be freaking out about them?

There are around 4,700 chemicals in the PFAS family. Here are answers to some common questions about them.

Faced with the eye-watering costs of building infrastructure, it makes sense to turn to much more cost-effective smart technology to get traffic flowing.

Paulo Paulino Guajajara was allegedly killed in an ambush by illegal loggers in Brazil’s Amazon forest.