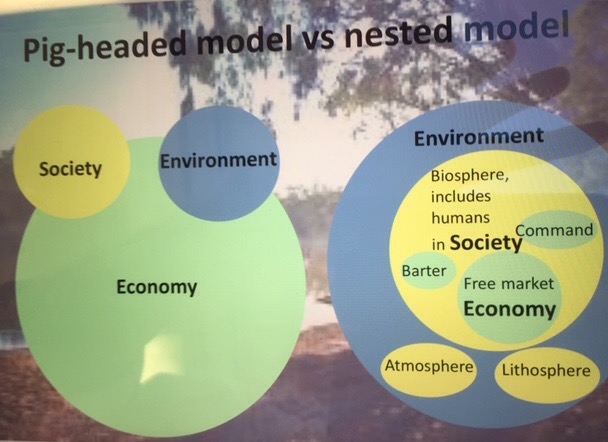 If you start with the wrong question (eg Pig- headed model – can we make a buck? Then let’s go and worry about the rest later.), you’ll come to grief, as BHP found. If everything is within the environment (Nested model – showing the environment is the sum total of all we have)’ then the starting question is can we do this without risking the environment. Then the question is will this damage the Biosphere? Then will it result in harm to Society? Our economy is one model for distributing goods and services within our society, which in turns depends on a healthy environment, so only then do we ask the question – can we make a buck? Yes but … and see the grief that happened and is still happening.
https://www.brisbanetimes.com.au/business/companies/png-s-ok-tedi-mine-disaster-money-locked-in-new-legal-fight-20191102-p536s7.html

$8 billion and counting: the growing cost of Australia’s droughts

The federal government has spent $8 billion on direct drought relief this century with the bill likely to grow as conditions worsen.

Independence of Cuenca in Ecuador

Victory Day in the Maldives

Flag Day in the UAE

The Hollywood star said the pair has made a commitment to support one another in their fight for climate action.

Bottled water is big business, but a growing number of residents close to the source say ‘water mining’ is draining a precious resource and adds to plastic pollution

$8 billion and counting: the growing cost of Australia’s droughts

The federal government has spent $8 billion on direct drought relief this century with the bill likely to grow as conditions worsen.

Blocking people from a conference won’t win hearts and minds

You need to have a dialogue with the resource sector to air grievances and establish activities that will drive the changes needed.

Wrong side of the chasm: Australia can still cross the bridge to a low-carbon world

If we all understood the economic value of a transition to renewables, we could move from policy incoherence to hope

The climate zealotry that the Morrison government was meant to stop is getting out of control, putting Australia’s energy supply at risk, and with it, the economy.

Volunteer guides fear they can no longer protect St Kilda’s penguin colony in the face of burgeoning tourism and fishing.

Bore applications have doubled as desperate farmers look for ways to access water to survive the coming summer. But the state government has warned there will be ‘winners and losers’ in the race to save drought-stricken farms.

NSW actually provided one third of environmental flows sent down the Lachlan River since July despite the minister’s attack on such water use amid the drought.

The sport of canyoning is growing in popularity, but the number of adventurers exploring canyons in the Blue Mountains is putting pressure on the spectacular but fragile environment.

The NSW deputy premier wants to rip up the basin plan, but that would put irrigators’ rights at risk, as well as endangering the health of the river system

ACT Wildlife will be unable to reliably man its 24-hour phone “into the foreseeable future”, with the charity stretched to its limits by a shortage of volunteers and a 570 per cent increase in calls for assistance.

Activists who’ve campaigned for years to end climbing at Mt Warning saying the recent closure of Uluru has given them the momentum they need to make it happen.

The NSW Deputy Premier has suggested ripping up the Murray Darling Basin Plan — but it’s a thought which is nothing more than a “brain fart” according to a SA senator.

Opponents of a premium tourism proposal for Lake Malbena in the Walls of Jerusalem National Park are planning an “Occupy Halls Island” protest for December.

Police, TFS warn Tasmanians to be prepared for 2019-20 bushfire season

Police are working with the Tasmania Fire Service to keep Tasmanians safe this bushfire season and they need your help.

With 11 voyages and 300,000 recorded observations under his belt, population ecologist Eric Woehler has dedicated his life to building a dataset to help monitor and track bird populations in a changing world.

The state government is stepping in to force a resolution to Perth’s most controversial apartment tower stalemate after multiple redesigns have once again failed to pass through the local planning assessment panel.

The state government is stepping in to force a resolution to Perth’s most controversial apartment tower stalemate after multiple redesigns have once again failed to pass through the local planning assessment panel.

The British Government is imposing an immediate moratorium on fracking, saying the industry risks causing too much disruption to local communities after a magnitude-2.9 tremor shook houses near a mining operation in August.

Research combining future climate conditions and arsenic-induced soil stresses predicts rice yields could decline about 40 percent by 2100, a loss that would impact about 2 billion people dependent on the global crop.

A fresh legal dispute has erupted over control of a fund set up to benefit the tens of thousands of villagers affected by BHP’s Ok Tedi mine disaster in PNG.

Oil has been washing up along 2,100 kilometres of Brazilian coastline for months. We finally know why

Authorities are describing the spill as one of Brazil’s worst environmental disasters, in the wake of oil washing ashore on some 2,100 kilometres of the country’s coastline for two months without explanation

The bid to protect a million square kilometres of eastern Antarctica again fails to win unanimous backing from the 26 country members attending a conference in Hobart.

A new tool uses an interactive database of geographic and genetic information to quickly identify where the confiscated tusks of African elephants were originally poached. It matches genetic sequences from poached ivory to those in the database. It relies on genetic information from a small, highly variable region of mitochondrial DNA from African elephants. This allows a more precise picture of the origin of the ivory. It also takes only about six days, researchers said.