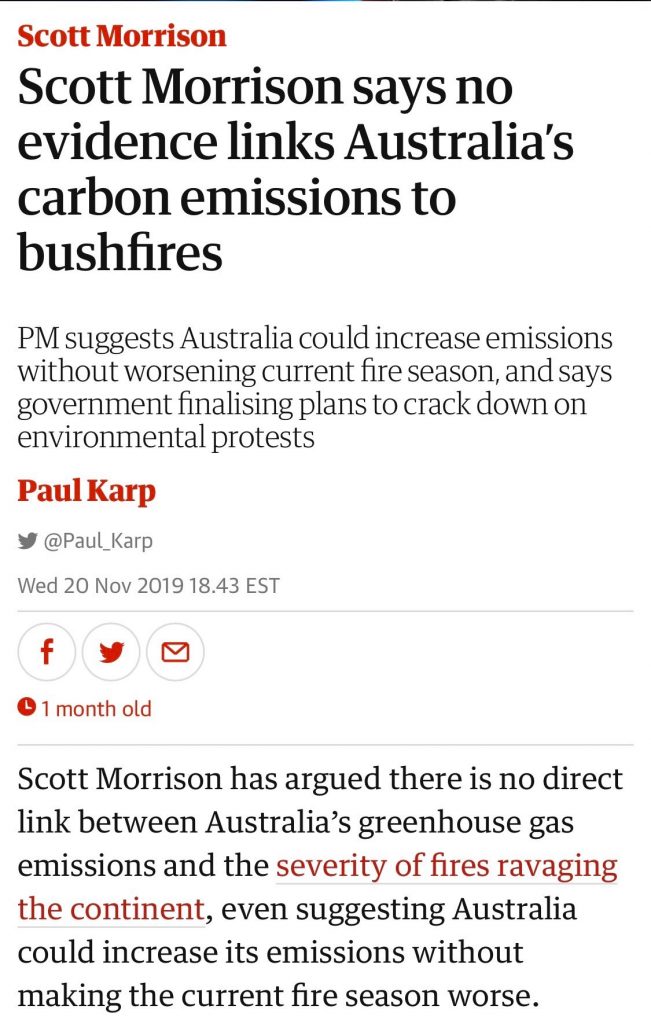 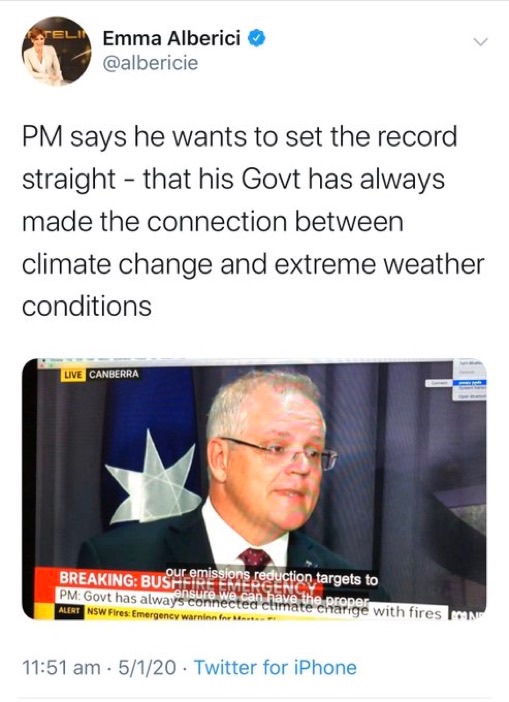 Traditional knowledge has already reduced bushfires and emissions in the top end, so why isn’t it used more widely?

Small change for climate change: Time to increase research funding to save the world

A new study shows that there is a huge disproportion in the level of funding for social science research into the greatest challenge in combating global warming — how to get individuals and societies to overcome ingrained human habits to make the changes necessary to mitigate climate change.

Mass communication professors at the University of Kansas analyzed a year of Twitter activity from nearly 500 climate change NGOs from 79 countries and found those from rich nations were most engaged and had the biggest audience, leaving others at risk of not having their message heard and being left out of the global movement.

‘Climate clubs’ offering membership for sub-national states, in addition to just countries, could speed up progress towards a globally harmonized climate change policy, which in turn offers a way to achieve stronger climate policies in all countries. This is the key finding of a new study by researchers from the Institute of Environmental Science and Technology of the Autonomous University of Barcelona (UAB), recently published in the open-access journal Environmental Research Letters.

The race to protect threatened species after the bushfires

Ecologists say Australia is in danger of “sleepwalking straight into an extinction crisis” if it doesn’t act to save threatened species hit by fire.

‘We are not miracle workers’: bushfires worsen already grim future for koalas

Koalas face extinction as devastating bushfires exacerbate suffering caused by drought and the loss of habitat.

‘It can be quite confronting’: The Aussies choosing to raise their own meat at home

More Australians are raising their own animals for meat for environmental and ethical reasons.

After the fire: can our plants bounce back?

Green shoots can already be seen among the black scorched earth, but experts are cautious about just how well Australia’s landscapes will regenerate after the fires that have ripped through millions of hectares across the country.

Traditional knowledge has already reduced bushfires and emissions in the top end, so why isn’t it used more widely?

Are fires ticking down the Doomsday Clock? [$]

Australia’s “firenadoes” could see the countdown to humanity’s demise tick closer to midnight.

Behind the smokescreen, the Coalition’s stance on climate change hasn’t changed at all

If Scotty from Marketing and his coal-fired peers really believed in the climate crisis, they’d be doing something about it

How we can end the fire apocalypse now [$]

Holidays are meant to be fun, not marred by helicopters on bushfire mercy dashes, writes Matthew Abraham, who says there are simple ways we can help affected communities.

How to reduce Morrison’s burning issue? Focus on fuel loads [$]

If Scott Morrison wants to cure his political wounds and prevent the green left’s political point scoring over bushfires, he must change the debate on fuel loads.

There’s nothing like certainty and no one is more smugly certain when it comes to climate change than the true believers.

The disconnect between political piety and bush fire reality [$]

Scott Morrison has faced a lot of criticism for his religious beliefs, but as Dr Ray Barraclough explains, not all religious Australians are as irrational.

Estimates of the cost of Victoria’s 2009 Black Saturday fires provide a staring point for calculating the much bigger cost of these ones.

Before we rush to rebuild after fires, we need to think about where and how

While the bushfire crisis might provoke a sense of urgency to rebuild, we need to stop and properly plan where and how we construct buildings and open spaces.

Australian sea lions are declining. Using drones to check their health can help us understand why

Australia’s only sea lion species is endangered and continues to decline. A new non-invasive monitoring technique could help to identify the causes and better inform conservation strategies.

Victorian authorities have issued an emergency warning for an out-of-control fire burning on French Island in Western Port Bay.

Australia’s national veterinary association and Animals Australia are calling on the Victorian Government to begin airdropping food into fire-affected areas after a $100,000 offer to buy food goes unanswered.

Bushfire-destroyed homes should not be rebuilt in riskiest areas, experts say

A rare stand of plants that has survived for tens of millions of years has been ravaged by fire in the wet, sub-tropical rainforests of northern NSW.

A third of the state’s national park land has been burnt by this season’s ‘unprecedented’ bushfires, potentially pushing dozens of threatened species including the long-footed potoroo to extinction in the wild.

Sydney and much of NSW has swung from one weather extreme to another, with heavy falls and cooler temperatures snapping the sequence of heatwaves and an extended dry spell.

‘It’s so depressing’: Why this developer can ignore NSW planning laws

The Department of Defence has been labelled arrogant over plans to build a substation at the Garden Island naval base.

‘What the hell is that?’: Brewery uses algae to reduce carbon emissions

Young Henrys has installed a 400-litre ‘bioreactor’ of algae at its Newtown brewery to reduce carbon emissions from its beer production.

Mount Kosciuszko’s famous and much-loved huts have suffered from the fires, with some completely destroyed

The massive bushfires that are burning vast areas of our coastline are leaving a black swathe in the high country. Kosciuszko National Park has been hit by the two big fires that swept into the park from the west, and there have been fires started by lightning within the park.

Backburning operations conducted to contain “mega-blazes” claimed homes and wildlife but experts say the lack of preparation by the NSW government for the bushfire season left firefighters with no choice.

Satellite images of the areas of NSW annihilated by a bush inferno confirm our worst fears. The maps show more than five million hectares of the state has been razed, including one quarter of the koala habitat.

What do urinating on trees, reusing fish tank water and changing the way you shower all have in common?

‘Notoriously difficult’: Will climate change wreck the dream of a Qld island holiday?

Island resorts are recovering after a decade in the doldrums, but face new challenges.

New Brisbane park to be nation’s most ‘iconic’ [$]

Brisbane City Council have revealed designs for a Brisbane park they envisage will become the nation’s most ‘iconic’ natural playground, including plans for a massive lake, a high-ropes course and mountain bike trails.

International outcry as more than 5,000 camels shot in APY lands

Play politics with fires and you’ll only get burnt [$]

Politics is never far from the fireground, but SA will judge harshly any politician who’s seen to be using the crisis to their advantage.

People in rural and regional communities will soon have access to the same concession bus fare entitlements as those living in urban areas.

Climate change: The time has come for real action [$]

No-one can dispute the science that tells us climate change is real. But amid all the posturing and outrage about the lack of action from our leaders on the issue, we are yet to see some real and affordable solutions

2020 may reveal if diamonds really are forever

With the closure of the Argyle diamond mine and the revival of the mothballed Ellendale site, this year is set to be a critical turning point for the Australian diamond industry.

The carbon footprint of dinner: How ‘green’ are fish sticks?

Fish sticks may be a tasty option for dinner, but are they good for the planet? A new study of the climate impacts of seafood products reveals that the processing of Alaskan pollock into fish sticks, imitation crab, and fish fillets generates significant greenhouse gas emissions.

How anti-sprawl policies may be harming water quality

Urban growth boundaries are created by governments in an effort to concentrate urban development — buildings, roads and the utilities that support them — within a defined area. These boundaries are intended to decrease negative impacts on people and the environment. However, according to a Penn State researcher, policies that aim to reduce urban sprawl may be increasing water pollution.

An UCO research group has discovered that the effect from solar radiation produces an exchange of nitrogen gases in soil that allows for sequestering harmful gases and turning them into nitrate.

Potassium-driven rechargeable batteries: An effort towards a more sustainable environment

Concerns about the scarcity of lithium and other materials necessary in the now-ubiquitous lithium-ion batteries have recently driven many researchers to look for alternatives, such as sodium and potassium. Prof Shinichi Komaba from Tokyo University of Science, Japan, and his team have worked for over a decade on this topic. In his latest review article, he extensively discusses his findings on the recent advances, promises, and limitations of potassium-ion batteries.

From Canada to Asia, Africa and Latin America, the world is seeking-out Australian Indigenous fire expertise to help prevent wildfire and curb emissions.

Indigenous leaders have gathered in the heart of the threatened Amazon rainforest to form an alliance against the far-right government’s environmental policies.

What is an endangered species?

What makes for an endangered species classification isn’t always obvious.

Climate may play a bigger role than deforestation in rainforest biodiversity

A new paper in The Condor: Ornithological Applications, published by Oxford University Press, finds that models which use terrain features offer both practical and theoretical advantages in identifying climate resilient habitats for migratory birds whose populations are impacted by climate change.

The cocaine trade stripped thousands of hectares of Amazon rainforest to grow coca beans. But inspired by traditional methods and feeling threatened by climate change, a small group of Colombian farmers are fighting back.

Where did the urban legend of the dangerous Australian drop bear come from?

Tricking visitors into believing Australia is home to predatory bears that drop from treetops on to unsuspecting people walking below has become a national pastime, but where did the myth originate?