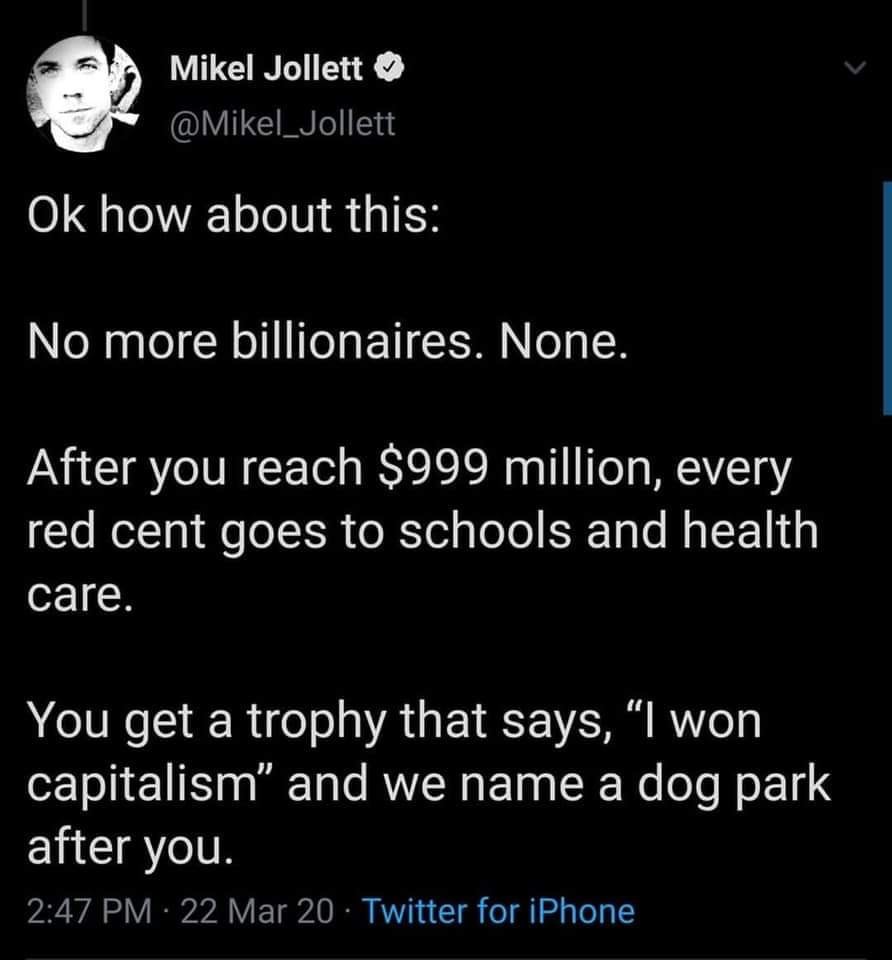 Peter Boyer’s South Wind prescription for post-Corona: we must renounce the ludicrous fictions on which capitalist economics is based: small government, endless growth, limitless wealth and the trickle down effect. And Mikel Jollett is onto it – how about the Gerry Harvey Shih Tzu Park?
http://southwind.com.au/2020/03/24/dumping-the-fictions-and-embracing-real-economics/

Coal combustion is not only the single most important source of CO2 — accounting for more than a third of global emissions, but also a major contributor to detrimental effects on public health and biodiversity. Yet, globally phasing out coal remains one of the hardest political nuts to crack.

With water use rising by 1% a year, cutting down could help curb climate-heating emissions, says World Water Day report.

How the virus has hit the climate movement: Bill McKibben

The Tyee talks to the prominent activist and author about fighting on two fronts.

Bushfire royal commission to push ahead despite coronavirus outbreak

The Royal Commission into National Natural Disaster Arrangements is pushing ahead with its work but revising arrangements due to coronavirus health measures.

The COVID-19 impact on Australia’s solar and storage sector may not be all bad, particularly as homes and businesses look for ways to cut energy costs and increase self-reliance.

Santos, one of the nation’s largest oil and gas producers, has slashed its spending by $550 million and delayed a major new project in northern Australia as the worsening coronavirus outbreak and oil price crash rock the global energy industry.

Ancestor of all animals identified in Australian fossils

A team led by UC Riverside geologists has discovered the first ancestor on the family tree that contains most animals today, including humans.

With the economy coming to a stall, the Federal Government should remap Australia’s energy landscape

It hasn’t taken much time for the Coalition government to dump everything it said was dear to its ideology in the face of Covid-19. Budget surpluses gone, Newstart allowances boosted, even the nationalisation of airlines is not ruled out.

The viral pandemic is opening doors to a new, reality-based economics.

Hypocrisy of our youthful indifference [$]

The inconvenient truth is there for all to see: Many of our younger generation are happy to berate on climate change but ignore the crisis unfolding now.

The Rail, Tram and Bus Union is calling for stricter measures for frontline transport staff.

The Victorian State Government has announced that it will lift its ban on conventional onshore gas exploration and drilling – and for farmers like me, that’s bad news.

One of the state’s biggest cotton-growing families is expected to fight fines of up to $500,000 after being found guilty of illegally pumping the equivalent of around 720 Olympic swimming pools from the battling Barwon River.

There are strong arguments for a new link to unlock the massive wind and solar resources in north Queensland.

The lord mayor said if re-elected he would fully fund the first two green bridges, at Kangaroo Point and Breakfast Creek.

Latest separation of South Australia grid puts questions around use of synchronous condensers, and rule changes appear to have made big batteries less effective.

Murray water users are questioning the looming allocations despite higher rainfall in the past month.

The owner of the Tahune Airwalk says he is still the “supreme optimist”, despite being left with no choice but to close the major tourist attraction and stand down staff just three weeks after reopening.

New restrictions barring West Australian travellers from entering the Kimberley — and potentially other regional areas — are under consideration and could be in place within days.

Studies have found hand dryers can disperse pathogens into the air. But does this really matter for the average person?

Banks are still funneling billions of dollars into fossil fuels

Bank financing for companies that are planning new coal, oil, and gas extraction increased 40% from 2018 to 2019, despite warnings that we need to stop burning these fuels.

A study conducted by the Politecnico di Torino (Italy), in collaboration with the National Metrological Research Institute (INRiM) and recently published on Science Advances, proposes a new technology for space cooling. No electricity is needed, but rather salty water possibly produced exploiting solar radiation

Coal combustion is not only the single most important source of CO2 — accounting for more than a third of global emissions, but also a major contributor to detrimental effects on public health and biodiversity. Yet, globally phasing out coal remains one of the hardest political nuts to crack.

Concrete solutions that lower both emissions and air pollution

‘A manatee is worth more alive’: the mission to save Africa’s sea mammals

Once branded ‘rogue animals’, the elusive creatures were on the brink of extinction, but hope is rising for their survival

The good news about reforestation efforts

Forests cover about one-third of the world’s land area — an expanse that has been dwindling for decades. But many countries are undertaking ambitious efforts to bring back the trees.

Scientists agree that amphibians are in trouble. But a battle over the details underscores a larger debate within the scientific community.

An international team of researchers, including two from the University of Montana, are working to help identify priority forest areas for protection on Borneo.

If artificial light shines into the Arctic Ocean during the polar night, does it matter? A new paper in Communications Biology says the answer to this is a strong yes.

Counteracting a legacy of extinctions

Now a new study, comparing the traits of introduced herbivores to those of the past, reveals that introductions have restored many important ecological traits that have been lost for thousands of years.

Pangolins And Pandemics: The Real Source Of This Crisis Is Human, Not Animal

Our dysfunctional relationships with animals and the broader environment are creating the conditions for disease like COVID-19. We can only expect more to come

Make way for the zombies of the sea

Oceans are warming, starfish are dying, and purple sea urchins are taking over.

Now for something completely different
6 strategies to juggle work and young kids at home: it’s about flexibility and boundaries

Flexibility and planning are key to managing boundaries if you’re working from home and have to look after kids.

State-by-state: how Australia’s new coronavirus rules will affect you

The regulations clearly proscribe some activities but are silent on others. So we asked two infectious disease researchers to reflect on some common scenarios.

Coronavirus: how to access the medicines you and your family need

Pharmacies are essential services and will remain open, but some people will still have problems accessing medicines. Here’s what you can do.