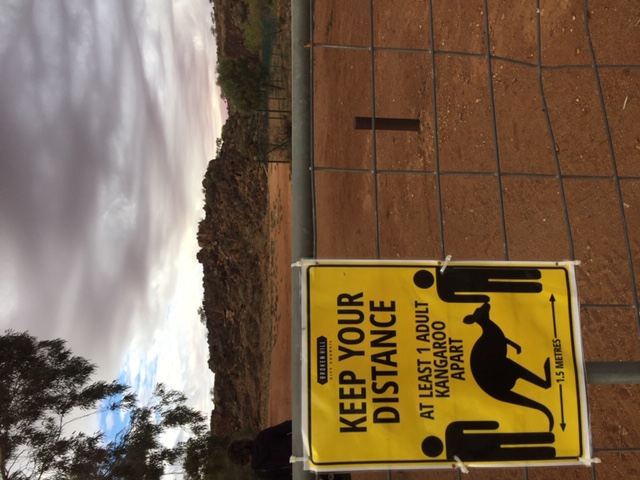 They know about COVID distancing in Broken Hill.
From: Maelor Himbury <maelor@melbpc.org.au>
Date: 25 May 2021 at 8:31:01 am AEST
To: undisclosed-recipients:;
Subject: Daily Links May 25

‘Bringing people along for the ride’: meet the climate activist converting coalminers to green tech with his Tesla

Eccentric MP Bob Katter joins a bunch of Aussie coalminers finding out first-hand the joys of green tech, thanks to a climate activist with an unusual approach.

We can’t plant our way out of the climate crisis

What if planting more trees isn’t the climate solution we want it to be?

The filmmakers behind a new documentary discuss Native land stewardship, building collaborative relationships with tribes, and the challenges of implementing Indigenous practices on a wider scale.

‘Not just dropping off a twig’: How climate impacts may be underestimated

The potential underestimation of the likely effects of a warming world is a key finding by an international team of scientists who examined 43 species of flies for tolerance to extreme heat.

Australia’s emissions have risen since 2005, apart from land use accounting tricks

New research shows Australia is lagging behind international peers in emissions reductions, despite what the Morrison government may claim.

“It’s a disgrace:” Snowy Hydro to use government subsidy for market dominance

Taxpayer funded Kurri Kurri gas plant will help give Snowy Hydro dominance of the NSW, Victoria and South Australia markets. But will it protect it from battery storage?

The Australian Senate has delivered a landmark report on the increasing impacts of feral deer, pigs and goats across the country and a roadmap for reform, one that all state and federal governments should heed.

Workers at explosives giant Orica have been permitted to stop laying charges at mine sites if they are concerned about Indigenous heritage risks.

After his party won the Upper Hunter’s contest on coal, an outspoken federal Nationals Senator has urged colleagues not to ‘play footsie with woke concepts’.

Costly hazards on the road to electric vehicle take-up [$]

Readers will be pleased to know independent member for Warringah Zali Steggall has been able to trade in her gas-guzzling SUV for a hybrid vehicle as parliament returns this week. Evidently, rigid parliamentary rules didn’t allow her to go the whole hog and get an electric vehicle at this stage.

‘Bringing people along for the ride’: meet the climate activist converting coalminers to green tech with his Tesla

Eccentric MP Bob Katter joins a bunch of Aussie coalminers finding out first-hand the joys of green tech, thanks to a climate activist with an unusual approach.

Show me the money: Welcome to the new golden age of corporate welfare

The Federal Government is paying out up to $2 billion to keep Australia’s last two oil refineries running. It’s what happens when governments get desperate and companies know how to play the game.

Preparing for a disorderly future

Our world has changed forever, and there’s no going back. Our children understand that. Unfortunately our leaders don’t.

By-election denial a danger to ALP [$]

The One Nation alliance with the mining and energy unions may have failed in its infancy at the Queensland state election but only because Annastacia Palas­zczuk found a way to counter it.

Up until the May 11 federal budget and last weekend’s Upper Hunter state by-election in NSW, I’d been thinking the odds were building against the Coalition winning the next federal election.

History shows that Labor took too much heart when Labor leader Kim Beazley unexpectedly pushed John Howard to the edge of extinction in 1998.

We could be a superpower: 3 ways Australia can take advantage of the changing geopolitics of energy

The International Energy Agency confirmed last week what many already knew: the world is undergoing a huge transformation in global energy markets. Fossil fuels are dying and renewables are on the rise.

Endeavour Energy gets smart about better managing record numbers of residential rooftop solar systems, with not a solar export charge in sight.

A 35-year-old Sydney man has been handed a lengthy jail sentence for the attempted illegal export of Australian native reptiles.

A $3.2 billion NSW government electricity contract will help foster the spread of renewable energy, including the construction of a big new battery in the state’s Riverina region.

A deal has been struck to build a 100-megawatt battery to help provide renewable energy to NSW schools, hospitals and government buildings.

City of Sydney has announced ambitious new energy targets across office, hotel and shopping centre developments from 2023, with net-zero compliance from 2026.

Labor’s gambit to back coal mining in the Upper Hunter byelection did not work and may have cost them votes to more progressive candidates.

The Snowy Hydro brigade will be out on force on Tuesday banging the drum about increased transmission investment to better serve consumers and break the power oligopoly.

The art of politics as we know is spinning reality in such a way that perceptions become more influential than what is actually happening.

Why the Hunter Valley gas plant is bad policy [$]

The Kurri Kurri gas fired power station will neither cut power prices nor add useful capacity. But it will push energy investment risk back onto the taxpayer, writes the first chairman of AEMO.

What would it take for you to buy an electric car? Does free registration sweeten the deal?

The ACT already has the equivalent of 100 per cent renewable electricity. Now Canberra drivers are being offered free registration to buy electric cars in a bid to further cut greenhouse gas emissions.

The firefighters’ union says members have a “training mountain to climb” to fully understand the hazards posed by crashed electric and hydrogen vehicles as the ACT government pushes ahead with fresh incentives to encourage zero-emissions vehicle ownership.

A newly-formed action group in Noosa has enlisted a high-powered lobby group linked to coal giant Adani as it launches a fight over the council’s climate change impact plan for beaches.

Carbon copy: How Qld scheme planted the seed for money to grow on trees

The Federal Government wants to reward farmers with cash payments for improving their environmental performance, cultivating an idea that germinated in Queensland.

Coal seam gas company Arrow Energy has reported another staggering $600 million loss as it embarks on its $10 billion Surat expansion.

An Adelaide court hears the owners of the Port Pirie lead smelter accept the plant was responsible for a toxic waste leak in 2019 that caused environmental harm.

The SA government plans to install 530 fast-charging stations across the state to fuel electric vehicle take-up, but the opposition wants details about its planned user charge.

The KI animals on brink of extinction [$]

Kangaroo Island’s devastating bushfires could see many animals move closer to extinction on Australia’s threatened species list. See which are most at risk.

Give our sign back before there’s shell to pay [$]

The timing of the theft of a sign warning drivers of endangered turtles near Goolwa could not be worse, worried wildlife volunteers say, as they plead for its return.

In Tasmania, the swift parrots’ plight has become emblematic of campaigns against old-growth logging.

Mainland taxpayers should be willing to help pay for a second $3.5 billion power interconnector under Bass Strait, given it will provide access to Tasmania’s dispatchable green energy, says Premier Peter Gutwein.

A new threat to Australia’s largest temperate rainforest in takayna / Tarkine is erupting as Chinese state-owned miner MMG concedes the company has not conducted all environmental studies needed to determine the project’s level of impact on federally-listed species.

I am here to answer the most common questions I get asked about feral cats, supply some facts about their life in Tasmania, and to give some advice on how to help our native wildlife cope with their presence.

After doing the sums, an economist says any hint the government-run Sustainable Timbers Tasmania is economically sustainable, as its name suggests, is utter nonsense.

‘You have no idea how terrifying it is’: Invasive gamba grass may fuel intense NT fire season

Top End residents are warned to prepare for an intense fire season, as above-average rainfall leads to destructive weeds growing to levels that could fuel dangerous fires.

‘Could be just as dangerous’: Top End warned to brace for busy bushfire season

‘Living climate change now’: how WA farmers are trying to turn the tide

Agriculture is seen as a key culprit in rising emissions. Some on the land are aiming to lead by example, making their properties carbon neutral

Native title holders drag state government into spotlight for its role in approving the destruction of one of Australia’s most significant archaeological sites.

First Dog on the Moon

Plastic is gaining traction as the next source of sustainable energy, despite its reputation as a major polluter.

Fewer babies’ cries. More abandoned homes. Toward the middle of this century, as deaths start to exceed births, changes will come that are hard to fathom.

The White House sees nuclear energy as a key part of the pathway to decarbonize the grid by 2035.

Russia’s foreign ministry has raised concerns over Washington’s implementation of the New START nuclear arms control treaty, saying the number of US launchers and bombers exceeds the agreed limit.

Plastic pollution is significantly increasing sand temperatures on remote beaches — and it is feared the animals that call those beaches home are struggling to cope.

Ecology, the field of biology devoted to the study of organisms and their natural environments, needs to account for the historical legacy of colonialism that has shaped people and the natural world, researchers argued in a new perspective in the journal Nature Ecology & Evolution.

Evidence of declining fertility in humans and wildlife is growing. While chemicals in our environment have been identified as a major cause, our new research shows there’s another looming threat to animal fertility: climate change.