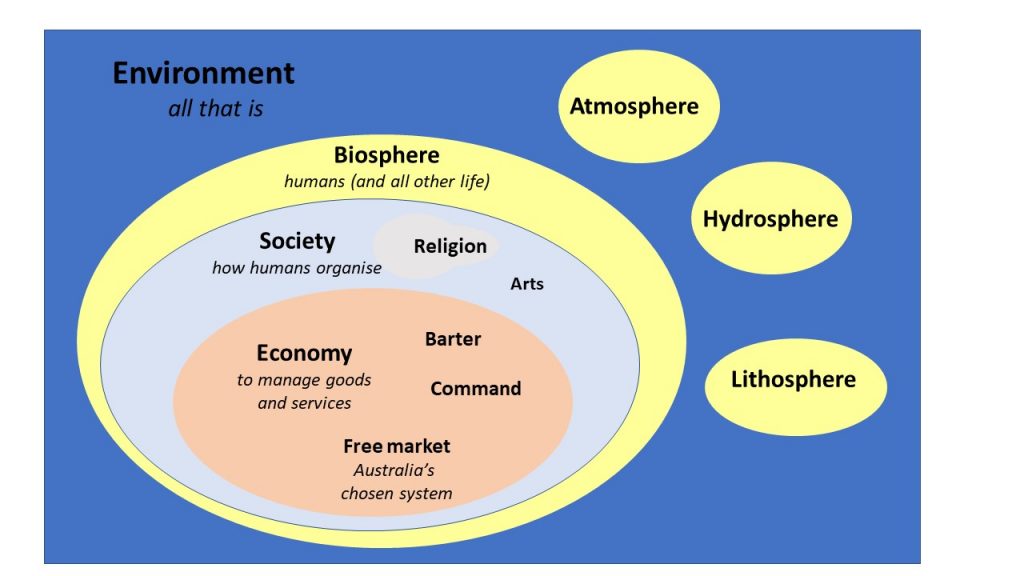 Here’s my take on the matter in agreeing with the selected article. The environment is all we’ve got and we’re part of the biosphere, a component of the environment. We humans organise into societal structures, other species live in groups, lead solitary lives, are colonial etc. Our society explains its origins, at least by some members, through religion, we express ourselves through the arts, we have selected from among the options a free-market economy to distribute goods and services. Get this order of things awry, as Menadue argues we are doing, and look at the trouble it brings.
https://johnmenadue.com/society-has-to-create-the-framework-in-which-business-works-not-the-other-way-around/

The enormous eruption of the underwater volcano in Tonga, Hunga Tonga-Hunga Ha’apai, triggered a tsunami that reached countries all around the Pacific rim, even causing a disastrous oil spill along 21 beaches in Peru.

Feast of Our Lady of Peace – Catholicism

The Maldives is being swallowed by the sea. Can it adapt?

Whether or not the Maldives can survive climate change, the country will never be the same.

The enormous eruption of the underwater volcano in Tonga, Hunga Tonga-Hunga Ha’apai, triggered a tsunami that reached countries all around the Pacific rim, even causing a disastrous oil spill along 21 beaches in Peru.

Australian business leaders are more alarmed about climate change than ever, with a report finding a big opinion shift in just eight months.

Tennis Australia ends partnership with Santos after one year

Australia is sprinting towards 100 per cent renewable energy, 24/7, 365 days a year, but very few are ready for it, least of all the coal industry and its subsidiary, the Morrison government.

A year on from a landmark report, nature – and law reform – is floundering

The first shipment of liquid hydrogen from Australia shows fossil fuels have a crucial transition role to ensure the world has affordable, reliable, and cleaner energy.

Business leaders — and the politicians that enable them —  must be put on notice that they must serve society, not the other way around.

When it rains, it soars: Wetland birds come back from the brink

A number of endangered wetland species will see a rebound in numbers following months of rainfall, according to wildlife experts.

Queensland’s ‘other sea change’ is altering the coastline forever

Australia’s eastern coastline continues to be hammered by tropical cyclones, rising sea levels and significant tides as islands are ripped in two. And experts predict other parts of the coast will be eaten away.

Tasmania Fire Service has downgraded the fire on Mackintosh Dam Road in Tullah on Tasmania’s west coast to advice, but warns there may be increased fire activity this afternoon.

Is gas a green energy source? The Europeans can’t agree [$]

Brussels hopes its ‘taxonomy’ will set a global standard for what counts as a sustainable investment – but domestic energy politics have intervened.

In Georgia, bloated costs take over a nuclear power plant and a fight looms over who pays

Could a knowledge commons unite and anchor our fractious, drifting humanity?

Imagine a world where the simple quest for knowledge united humanity and gave us a chance of peaceful coexistence.

A year into the Biden Administration, environmental hope is sparse

Back in the heady days of 1999, NBC gave activist filmmaker Michael Moore an unprecedented opportunity to take on corporate America.

Demand for rhino horn in Asian markets, especially Vietnam and China, has pushed the remaining rhino populations to the brink of extinction.