Buff-breasted Buttonquail: An image claimed to be of this species revealed 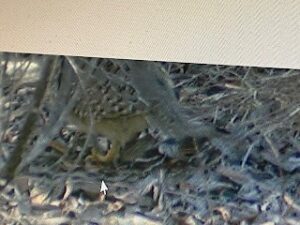 A previously unpublished image above and below (cropped) is claimed by north Queensland naturalists John Young and Lloyd Nielsen to be a Buff-breasted Buttonquail. It was taken at a secret site late last year on a camera trap in north Queensland where Young claims to have encountered Buff-breasted and Painted Buttonquail together, along with the nests of both species. 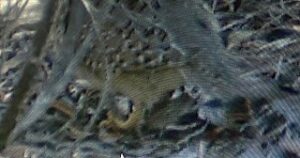 As I reported last week – in the next post on this blog and in the pages of The Weekend Australian – Young published an image earlier this year of what he said was a Painted BQ on its nest at this site, labelling it on Facebook: “Male Painted Buttonquail brooding eggs on nest Number 5 after a serious search for breeding sites over the past few weeks.” When that image is “flipped” or inverted, however, it is clear the nest is the same as one in an image published in 2018 that Young claimed to be that of a Buff-breasted BQ at Brooklyn, a different site. The composite below shows the many features common to nests in the two images. In response to this publication, Young and Nielsen, who have launched a public appeal for funds to aid Young’s research at the secret site, directed a torrent of personal abuse at me, but neither denied its substance.

Much discussion ensued about what happened to multiple images of Buff-breasted BQ claimed to have been taken by Young at his new site. Young showed me the camera trap image on his phone during a visit to my home (below) last December. At the time I was initially impressed; the bird looked different and did not appear to me to be a Painted BQ. However, I was concerned that key facial features, especially eye colour, were obscured in the image and therefore I could not be certain. Young was insistent that I publicly agree with his identification and I did so after receiving an iron-clad assurance that he had other images showing the key missing features. My request to retain a copy of the image was denied. 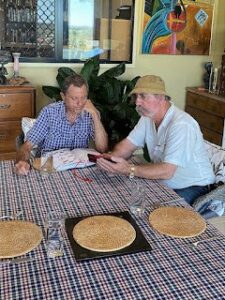 As I freely admit, that was a mistake on my part. I subsequently looked again at the image on a bigger screen on Nielsen’s home computer, and considered buttonquail identification material from various sources. Those included notes published recently by Patrick Webster about plumage phases not previously known for Painted BQ, and useful commentary from my friend Chris Corben, an astute observer of the finer features of feathers. It seems likely this image in fact depicts a Painted BQ (below). The rump and upper tail of a Buff-breasted BQ should be sandy-rufous rather than brownish-grey. The relative absence of dark bars on the upperparts of Buff-breasted BQ suggest the species should be more sandy-rufous than Painted BQ. I touch on this in a previous blog post: https://sunshinecoastbirds.blogspot.com/2021/12/painted-or-buff-breasted-buttonquail-in.html 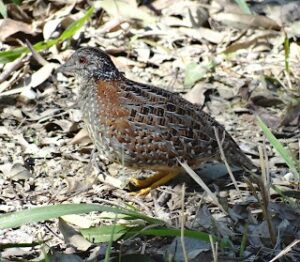 The claimed image of BBBQ is one of what Young insisted was a collection of 17 images taken from camera traps at the time. What happened to the others? They have not surfaced. Young (below, at his new site) said publicly they would be kept in safe hands by himself and Nielsen, until a joint paper they are working on about the Buff-breasted BQ is complete. 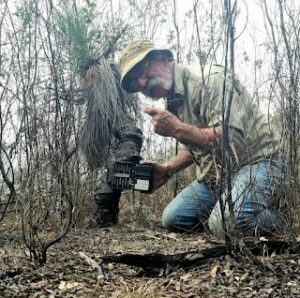 To my surprise, when I saw him in December, Nielsen said he was shown just the single image – the one featured in this post. Young claims more recently to have taken further images. He has furnished an unknown number of these in the form of colour prints on paper to Nielsen and others. One friend, Alwyn Simple, described the eyes of a bird in one print as “large milky yellow” and not the red eyes of a Painted BQ; below is a composite showing these differences.

Nielsen says he is “100 percent” convinced the latest images are that of Buff-breasted BQ. He initially said the earlier camera trap image was also “100 per cent” a Buff-breasted BQ; when I asked why, he referred to its “uniform and plain” tail and “streaky, dark” wing pattern. Later, Nielsen said that “perhaps I should have said 80 percent”. Last week on Facebook, Nielsen seemed to be having second thoughts about the adequacy of images produced to date, saying: “We need to get good high quality photographs…” and “we are hoping to get high res images this coming breeding season”. The waiting game continues and like many others, I would be delighted if these images eventually emerge. Nonetheless, it is curious that among the many BBBQ nests supposedly found over several decades, not a single image of a bird on a nest has surfaced, when organising this at night especially should not be difficult. In anticipation of further personal vitriol as a consequence of this post, I point out I am criticising neither Young nor Nielsen but am endeavouring to stick to facts which should be in the public arena. 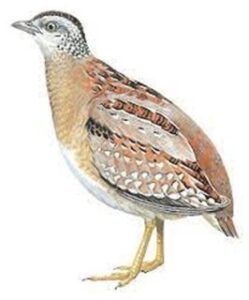