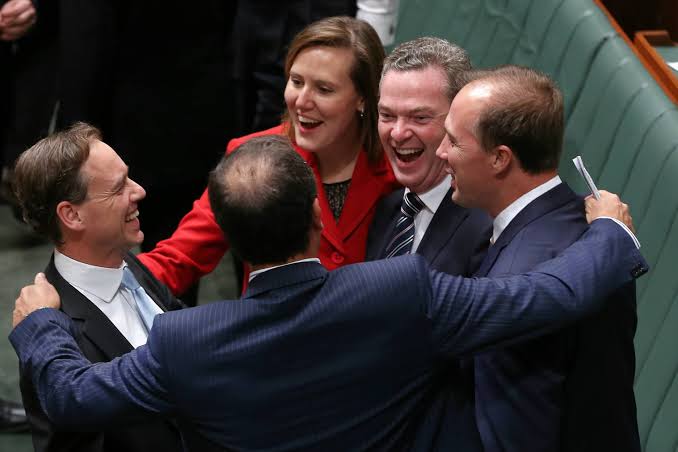 https://theconversation.com/grattan-on-friday-government-win-on-climate-legislation-leaves-opposition-looking-like-a-stranded-asset-188231
And who is left standing from this infamous mob?

Striking graphs that show humanity’s domination of the Earth

An easy-to-use database quantifies our shake-up of the planet, from fossil fuels to farming to plastics. But there are a few bright spots.

The Kyoto Protocol. McCain-Lieberman. Waxman-Markey. Build Back Better. For more than 25 years, we’ve come oh so close to taking action on climate, only for those efforts to flame out. Lord knows I’ve been wrong before, but I’m filled with hope that now, in 2022, Washington is finally willing to take the bold action that’s so desperately needed to address the climate crisis and environmental justice

Floods, storms and heatwaves are a direct product of the climate crisis – that’s a fact, so where is the action?

As Guardian analysis reveals that human-caused global heating is driving more frequent and deadly weather disasters, there is no place for denialism any more

After agreeing on laws to cut greenhouse gas emissions, the two parties are on a collision course over the future of fossil fuels

–        A change in governance and a rapid shift to renewables should ensure this is the last energy crisis for Australia, says Simon Corbell, the head of the Clean Energy Investment Group.

Avoiding a gas shortage is one thing, but what’s needed is action on prices

The Albanese government has accepted the Australian Competition and Consumer Commission’s recommendation to “initiate the first step” to trigger the controversial Australian Domestic Gas Security Mechanism to avert a supply crisis in eastern Australia.

Perhaps not since the marriage equality vote has the passage of a bill in the House of Representatives carried such a combination of substantive and symbolic import as the Albanese government’s climate legislation.

No one can afford further delays to meaningful climate action

Have you ever stopped to think about becoming extinct? Possibly not, and I’m not sure it occurs to mountain pygmy possums either, but it is one of the most vulnerable native animals to extinction because of climate change.

We are assured that public transport – usually in the form of heavy commuter rail – will ‘solve’ the rising congestion problem. If you believe that, please share whatever’s in your Kool-Aid.

Phantom of the Opposition

The Coalition opposed every amendment to Labor’s climate bill, including one favouring regional input

Peter Dutton’s decision to mindlessly oppose Labor’s climate bill won’t make fossil fuel companies happy — an unusual position for a party that has worked so assiduously in their interests for so long.

How Australia created its own gas price mess

The problems we face today with gas prices and supply are a result of decisions made almost 30 years ago that have been systematically ignored by governments.

Climate target will soon be law, now we must go hard to catch up with science

Passage of the climate bill is important but largely symbolic. Now it’s time to go in hard and make sure it matches the science.

On climate, the Coalition looks for an each-way bet on a losing horse

At the close of Parliament’s first sitting fortnight on Thursday, two sights captured perfectly the political dilemma facing the Coalition.

Australia must wake up before it’s too late [$]

Australia is facing both gas shortages and geopolitical instability, yet the Albanese Government is focused on what our emissions targets should be in eight years’ time. By then it will be too late.

Labor’s successful navigation of a legislated emissions target through the lower house is a win for Anthony Albanese, but it’s not the end of the climate wars.

The day the climate changed and the glee club went missing

Once, a government went disco over killing a carbon tax. Now, a major climate change bill passes without so much as a high five. Climate wars are exhausting.

Here’s the truth about the Australia of not so long ago: we didn’t have throw-away plastic, and we survived.

Labor’s ‘diabolically difficult’ journey to 43pc has only just started

Labor can celebrate an important victory with the 43 per cent legislation. But that was the easy part. What comes next will test the government to its core.

Albanese outflanks both left and right in climate win [$]

The Prime Minister will have taken satisfaction from watching Labor’s existential Green rivals paint themselves into a corner.

Climate challenge must be matched by energy reality [$]

The challenge for Labor will be to hit its emissions targets while keeping the gas flowing and the lights on during the transition.

For a Big Idea that leads opposition to power, go nuclear

Peter Dutton should go all the way and promise to build nuclear reactors on the sites of our closing coal-fired power stations.

It is extremely disappointing that, less than a year after the Coalition took the historic step of committing Australia to zero net carbon dioxide emissions by 2050, and 75 days after Australians couldn’t have made it clearer they wanted strong action on climate change, only one courageous Coalition MP could bring herself to vote for the ALP’s 43 per cent 2030 emissions reductions target.

None of the suggested energy policy reforms address the root cause of the current problem, which lies in the electricity sector, nor the longer term problem, which is all about gas prices.

The climate wars are over – cartoon

Despite pleas from unions and the Greens, the bill easily passed upper house after Coalition sided with Labor

Logging under way a month after greater glider declared endangered

Less than a month after the greater glider was declared endangered, logging is underway in a Victorian forest home to the rare possums.

A Drum Rebellion-organised action outside Tanya Plibersek’s office urged her to protect kangaroos.

On behalf of the Australian Government, the Australian Renewable Energy Agency (ARENA) has today announced $318,000 in funding to Ground Source Systems to demonstrate a full-scale solar PV and ground-source heat pump system, with gas backup, for heating and cooling at a commercial broiler facility in Yanderra, New South Wales.

More than ever, it’s time to upgrade Sydney-Melbourne railway

Last week, New South Wales Premier Dominic Perrottet said that raising Warragamba Dam was the “best strategy” for managing the flood problem in the Hawkesbury-Nepean valley. It is not. It is not even a good strategy, or close to one.

Rising gas prices are already convincing ACT households to switch to electricity, but the government says all newly built homes will not be able to be connected to gas from January 1.

Back to the Future: This DeLorean is being converted to an EV to showcase the growth in the zero-emissions industry

For the first time in Australian history, a federal environment minister flags rejecting a coal mine

Tanya Plibersek proposes rejecting Clive Palmer’s Central Queensland Coal Project on the grounds it is likely to damage the Great Barrier Reef. It is the first time in Australian history a federal environment minister has set the wheels in motion to reject a coal mine.

The reef is strong, so stop the scare campaign [$]

The results of the annual reef survey show brilliant coral coverage. Time to set aside the doom and celebrate.

An artist has been recognised for her work to shine a light on Australia’s environmental issues and what may be lost if something is not changed.

Another dolphin from the Port River sanctuary has died. It’s the sixth dolphin death in the past year.

Why Tassie power bills could surge even higher [$]

Tasmanian consumers could be exposed to further power price rises after already being hit with a 12 per cent jump recently.

For Andrew Morgan and Dave Wise, a chance meeting at a university bar led not only to a long friendship, but also the creation of Australia’s first drowned timber company.

The company led by Australia’s richest person, Gina Rinehart, wants to put iron ore roads and workers’ camps in Western Australia’s north near a national park and through asbestos-riddled Wittenoom.

Scientists have created a novel technology that can help to tackle climate change.

Northumbria University’s Dr Shafeer Kalathil is among a team of academics behind the project, which uses a chemical process that converts sunlight, water and carbon dioxide into acetate and oxygen to produce high-value fuels and chemicals powered by renewable energy.

Striking graphs that show humanity’s domination of the Earth

An easy-to-use database quantifies our shake-up of the planet, from fossil fuels to farming to plastics. But there are a few bright spots.

The United Nations’ nuclear watchdog says safety principles at a Russian-controlled power plant in Ukraine “have been violated” and urgent steps are needed to avoid a nuclear accident.

The time for radical implementation is now

Policy opportunities to increase material circularity in the buildings industry

This policy brief outlines recommended steps municipalities can take to increase material circularity and reduce emissions in the buildings sector.

This company is turning plastic trash into construction blocks

Imagine taking heaps and heaps of earth-polluting, unusable plastic waste and actually transforming it into something constructive?

Whether you’re a fan of nigiri, gunkan or temaki and buy it from the supermarket or enjoy it in a high-end restaurant, the global sushi market is big business. But climate change is starting to have an impact on the industry.

Electric vehicle driver deflated for want of a spare

There is no room for a spare in EVs because the battery takes up all the space.

A new model predicts that marine microbes could shrink by up to 30% in the future due to climate change, impacting bigger organisms that eat them including fish, potentially disrupting the food chain from the bottom up.

Grasslands’ biodiversity and resilience to disturbances such as fire, heat and drought is the result of a slow process over hundreds of years, like that of old growth forests, finds new CU Boulder-led research

Researchers embark on mission to find all world’s ants

A team of international researchers is shining a light on the often understudied “little things that run the world” — ants.