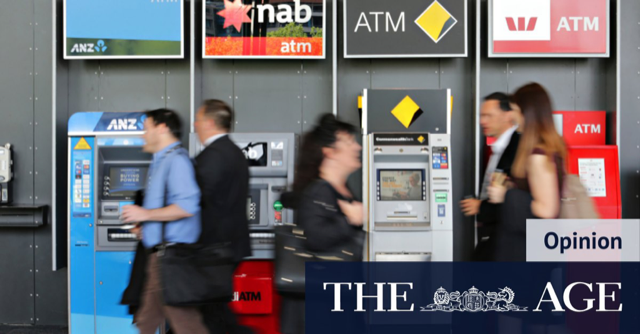 When ten steps forward and none back is what needs to happen for banks to reduce climate risk, we’re likely to see almost as many steps back as forward when they stare down shareholders. Pretending the emergency isn’t on is no response.
From: Maelor Himbury <maelor@melbpc.org.au&gt;
Date: 5 December 2022 at 9:00:51 am AEDT
To: undisclosed-recipients:;
Subject: Daily Links Dec 5

In a new book, Annie Proulx shows us how to fall in love with wetlands

Worried about climate change, you may have eco-anxiety

Over two-thirds of Americans have experienced eco-anxiety, according to a 2019 survey from the American Psychological Association.

Shared electric vehicles are being offered in more apartment buildings, office blocks and hotels — and experts say they could see some drivers ditch private cars altogether.

‘The conference for nature this month in Montreal could be what Paris was for climate. We must seize this opportunity’, environment minister Tanya Plibersek says

In the surest sign summer has arrived in Australia, temperatures are forecast to rise above 40 degrees in parts of the country from next week.

Prices for the fossil fuel, iron ore and gas will add $58 billion to tax revenue and deliver Treasurer Jim Chalmers a budget bottomline temporarily in balance.

Cement Australia is moving into carbon capture and storage amid growing pressure on heavy industry to reduce emissions.

Investors are now less concerned about climate policy, but they are also demanding greater action before committing their money.

Electricity bills are likely to remain high until at least the middle of next year, as Anthony Albanese makes a last-ditch push to strike a deal with Queensland and NSW to impose coal price caps.

Gas companies raking in super profits can be convinced to play ball on bringing down energy bills without drastic legislative changes, the former head of the competition watchdog has flagged.

Climate bell tolls for banks as investors turn up the heat

Over the next fortnight, three of Australia’s big banks will face a fresh round of shareholder pressure over their responses to climate change.

Half of Australia’s biggest companies have net-zero emissions plans, but climate action may come too late

About half of Australia’s biggest listed companies have plans to reach net-zero greenhouse gas emissions, our new analysis has found.

The Albanese government’s move will deter much-needed new investment in Australian production and set a dangerous precedent for mining companies.

Time for a conversation about nuclear energy [$]

The Prime Minister is opposed to a mature national conversation about nuclear energy, but the voices of the Australian people still want to be heard.

In minister Bowen, Labor gambles on the power of one [$]

The Energy Minister’s timetable for solar panel and giant wind turbine installation has collided with the roadblock of cold, hard reality.

In a decarbonised economy, the value of fossil fuel resources is blunted.

This week’s national cabinet meeting is one of the most dangerous gatherings of Australia’s leaders in recent times, with the potential to plunge the east coast of the nation into energy turmoil.

Comparing the way we live today with the 1960s, one thing in particular sticks out. Back then, I think we lived closer to the environment.

Can a skyscraper be low carbon?

Melbourne is building the country’s tallest apartment building and COP27 has just finished. Here’s an explainer linking the two.

Australia has been making big improvements in renewable energy, according to an annual scorecard from WWF Australia.

Greater glider now endangered in NSW, but what is driving its demise?

The southern greater glider has been made endangered in NSW due to climate change, bushfires and native logging severely reducing its population and habitat.

‘We cannot support it’: Liberals will oppose light rail to Woden

The Canberra Liberals have formally pulled their support for the second stage of light rail, saying the route to Woden would not be built if the party was elected in 2024.

Madness is trying the same thing over and over while expecting a different result, runs the familiar truism.

‘There’s a lot of anxiety’: Concerns over power cuts as River Murray rises

As the River Murray continues to rise, farmers worry about the impacts of having their power cut off. Meanwhile, authorities will begin relocating a group of the most vulnerable aged care residents from Renmark this week.

Why building subs will ‘bust myths’ over nuclear power [$]

Adelaide-based submarine construction will bust “ill-founded” ideological myths about atomic safety – according to the Premier – as he opens the door to nuclear power.

Millions of animals are killed, injured or orphaned every year on Tasmanian roads. See why a new app could be the key to saving them.

As this city sweltered through record heatwaves, the bitumen was even hotter. So what can be done about it?

Darwin is known for its formidable heat, but after a cyclone took out many of its trees, there are fears a lack of shade and other cooling measures could drive people away from the Northern Territory capital “even more quickly”.

Traditional owners and environmentalists are saying the Fyles government has made an ‘extremely risky’ move on gas fracking development.

The Northern Land Council has accused the Northern Territory government of being “sneaky” in its handling of a controversial new gas industry law.

Predators, climate change have pushed a cute quail beyond the brink, researchers say

Painted button-quails have not been spotted on one island at the Abrolhos since 2006, while very few birds are left elsewhere.

State-owned West Australian power provider Synergy is facing questions about whether it paid millions of dollars to import the wrong type of coal as it scrambles to keep the lights on this summer.

Bangladesh’s economic losses from air pollution are estimated between 3.9% and 4.4% of the country’s gross domestic product in 2019, said a World Bank report on Sunday.

China eyes 10% cut in pesticide use on fruit, vegetables by 2025

China, the world’s top user of pesticides, aims to reduce their use in cultivation of fruit, vegetables and tea by a tenth within three years’ time, the farm ministry said on Thursday, in an effort to curb chemicals in the food chain.

In Mexico, endangered monarch butterflies inspire hopes of a comeback

The migratory monarch population has fallen between 22% and 72% over the past decade, according to the International Union for the Conservation of Nature, which declared the species endangered in July.

The Guardian view on biodiversity collapse: the crisis humanity can no longer ignore

A million animal and plant species are perilously close to extinction. Their fate and ours are intimately connected