Off list again – do you think we can do business as usual? Our kids and grandkids will experience a horrible world when all of our chooks come home to roost.
By 2070 (on current path) – 3 billion people will live in uninhabitable zones – Less than 50 years’ time. The migration levels will be beyond anything ever witnessed. 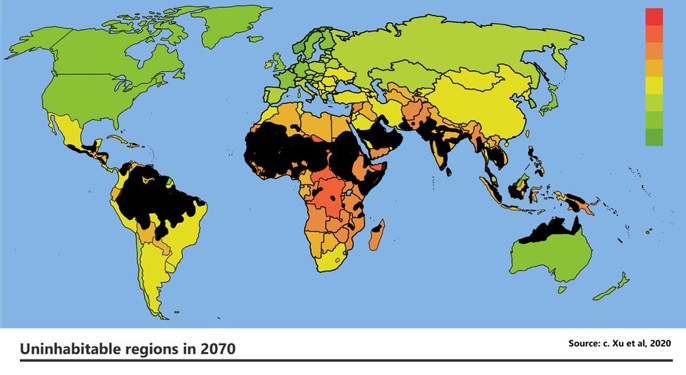 Doomsday Clock is the closest it has ever been to midnight

Atomic scientists have set the “Doomsday Clock” closer to midnight than ever before.

How climate change threatens our books [$]

Libraries are vulnerable to floods and fire, which are becoming more frequent threats.

The need for creative thinking, widespread cooperation and radical climate solutions is more than ever as this year is expected to bring about another round of climate-related calamities.

Hundreds of millions of people to be affected by sea level rise, new modelling suggests

Updated elevation models of coastal areas show that more than twice as much land could be covered by water due to climate change-linked sea level rises than previously thought.

Is it time to call time on the Doomsday Clock?

It’s been ticking down the seconds to nuclear apocalypse for three-quarters of a century, but it’s not so helpful when it comes to climate change.

The energy sector is reportedly set to be one of the biggest areas of growth in 2023. Here, four energy lawyers discuss what’s in store for the legal profession as the space continues to boom within the Australian economy.

Coal and gas are in a long structural terminal decline, renewables are booming and pushing expensive, unreliable, polluting fossil fuels out of the market.

The Energy Security Board’s board favoured solution to grid access is widely opposed. Energy ministers must tell it to move on and focus on something useful.

Feds must not compound the mistakes of state leaders on energy.

Energy giant Woodside has warned that it will struggle to justify exploring for more gas off Victoria’s coastline and can’t yet resume east-coast gas sales talks for 2024 amid ongoing uncertainty about the federal government’s gas market intervention.

The Australia Institute says allowing another 40 million tonnes of coal to be mined in the NSW central west does not stack up economically or environmentally.

The sound of travelling by public transport in the ACT has changed, with the warning sounds of an electric bus a new element to the cacophony of Canberra’s roads.

Powering up: State plans to take over $2.4 billion CopperString project

The State Government has admitted it was moving to take over the development of CopperString project, a $2.4 billion electricity generation scheme that was expected to open the vast north west of the state to minerals development and renewable energy.

The union representing Brisbane council bus drivers has filed a complaint with the state’s industrial umpire in an ongoing dispute about the nighttime safety of passengers and those behind the wheel along two southside routes.

Queensland says $75 million facility represents a “Eureka” moment for the shift to critical minerals to support renewables and battery storage.

“Glimpse of the future:” South Australia peaked at 91.5 pct wind and solar when links were down

South Australia reached an “extraordinary” 91.5 pct wind and solar even when its main transmission links were down, in what AEMO says is a “glimpse of the future.”

Previously described as unsafe and unsustainable and thought to have made its final trip, Tasmania’s Spirit of Devonport ferry service could be back on the water this year.

The Environment Protection Authority (EPA) engaged the Water Management and Assessment Branch (WMAB) of the Department of Natural Resources and Environment Tasmania (NRE Tas) to undertake river health monitoring in the Plenty River in September 2020 following a pollution spill event from landspreading activities adjacent to a commercial composting facility in the Plenty River catchment.

In another setback for Santos’ $4.7 billion Barossa gas project, the national regulator has ordered the company to pause construction of its pipeline over concerns about its potential impact on Indigenous cultural sites.

WA has new ‘landmark’ climate laws on the way. But what will they change?

WA is set to legislate emissions reduction targets in its push towards net zero, but there are warnings it could be business as usual for the state’s big polluters for at least the next decade.

What is the Doomsday Clock and why have atomic scientists just moved it closer to midnight?

The clock now sits the closest to midnight it has ever been.

A prominent short-seller has released a scathing research report on the conglomerate of Asia’s richest person, sending shares plunging.

New research provides evidence that some types of natural environments are associated with a decreased risk hospitalization for neurological diseases such as Alzheimer’s disease and Parkinson’s disease.

How plants are inspiring new ways to extract value from wastewater

Scientists are drawing inspiration from plants to develop new techniques to separate and extract valuable minerals, metals and nutrients from resource-rich wastewater.

The single oil spill that can disrupt the global energy supply

A maritime area three times the size of the city of London holds the highest risk for oil spills in the Gulf which can have devastating consequences locally and globally.

During a dietary study on fishing cats living near Colombo, Sri Lanka, researchers made an unexpected finding: Some scat samples collected contained plastics.

Amazon freshwater stingrays gain much-needed protection — will it be enough?

Two little-known and rarely studied species of freshwater stingrays — yes, such a thing exists — just gained enhanced international protections, but will it be enough to save them?

Under President Joko Widodo, Indonesia has gained international praise for its conservation policies. But now the government is clamping down on scientists who are questioning official claims that the country’s endangered orangutan and rhino populations are increasing.